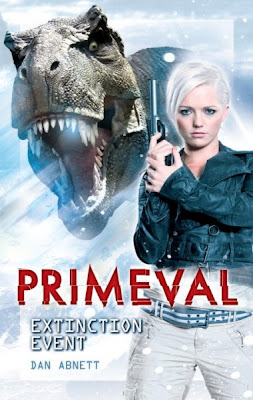 When an Entelodon goes on the rampage down Oxford Street in Central London, causing untold damage and loss of life, Cutter decides to investigate a new approach to tackling the anomalies.  However, a violent encounter with a mysterious Russian scientist exposes the team to a terrifying new complication.


When Cutter, Abby and Connor disappear without a trace, Lester and Jenny must use every trick in the book to try and track them down.

I've not read a tie-in novel for the longest time.  I, of course know of Primeval, have watched the occasional episodes, and I like what I've seen, but we've not sat down to watch the various series from start to finish.  However, this did not preclude me from thoroughly enjoying this action packed novel by MFB favourite, Dan Abnett.

Now, Dan is one of Mark's favourite authors, but I called dibs on Extinction Event when it came in because I really wanted to read a Dan Abnett novel for myself.  And bloody hell - I loved it.  I loved the easy to read writing, the capable way Mr. Abnett had of playing a bit of catch-up with the reader to bring them up to speed with what's going on in the Primeval universe, and the overall "true-ness" to the feel of the characters whom I know briefly from TV.

There is a bit of science thrown in, to keep it meaty enough and action galore with some great fight and running-away scenes for good measure.

Part of the novel takes place in Siberia, which is where Cutter, Connor and Abby are taken by the Russian who kidnaps them.  Slowly but surely the three piece together the reason why they are there: an anomaly so large it is difficult to comprehend, has been torn open, allowing deadly late cretaceous dinosaurs to come through, including things like a couple of friendlies like the T-Rex and some Torosauruses.  But there is more to the anomaly than just creatures coming through, something else, massive and hugely threatening to the world on both sides of the anomaly and the team have to figure out - and quickly - how to prevent it from happening or something!

Tense, cinematic and very believable, Extinction Event freaked me out a little.  It is a clever, believable story and it had me rushing through my reading, wondering how it would be solved. Obviously, I won't be telling you, that's cheating, but if you've not ever read a tie-in novel before, and even if you don't know Primeval, I cannot recommend Extinction Event enough.  It is written within the world of a known cast of characters and various events, yet it could easily be a standalone and turned into a big screen adaptation.

I loved that it all felt real to me - that I managed to understand the characters better and that you have this almost personal interaction with them, something you don't get when watching a tv show.  I went searching for a decent cover picture but instead found this fantastic review instead, which I'm linking to because it is written by someone who does not know Dan Abnett at all or the TV show.  Also, it is a bloody spiffy review.  And funny.

Find Dan Abnett's blog here.  Primeval: Extinction Event has been out since January this year from Titan Books  and I apologise profusely for being rubbish and not reviewing it sooner.  The appetite has been whetted.
Who wrote this? Liz at 8:07 am

I haven't read a tie-in novel since I read Splinter in the Mind's Eye (by Alan Dean Foster, published between Star Wars and Empire Strikes Back) sometime in the late 80s. But it looks like I have to get this one.

I'm a fan of Primeval, and I loved Dan Abnett's Embedded. -Which I'm sure Mark will join me in urging you to read if you haven't already :-P