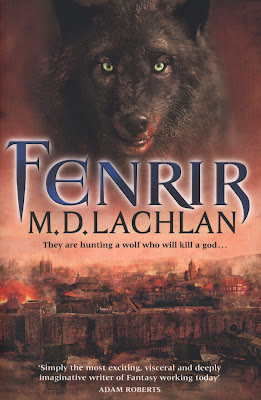 The Vikings are laying siege to Paris. As the houses on the banks of the Seine burn a debate rages in the Cathedral on the walled island of the city proper. The situation is hopeless. The Vikings want the Count’s sister, in return they will spare the rest of the city.

But the Vikings have their own gods. And outside their camp a terrifying brother and sister, priests of Odin, have their own agenda. An agenda of darkness and madness. And in the shadows a wolfman lurks.

I picked up Fenrir with a self inflicted disadvantage, namely that I hadn't read Wolfsangel, which this follows on from. Liz read & reviewed Wolfsangel back in May last year and I remember her raving about it. So from that perspective I was quite keen to see what all the fuss was about, but at the same time I wanted to see how Fenrir fared as a standalone given that it wasn't a 'direct' follow on. Fenrir is set decades after the events of Wolfsangel, and Odin, Loki and the wolf known as Fenrir are about re-fight their battle of wits and wills through the lives of three mortals.

The story opens with Paris under siege by an army of Northmen under the banner of Sigfrid, who's seeking a young woman named by his Odin- priests, a woman who holds the key to the prophesied return of Odin to the world. A pragmatist, he's only interested in the prophecy for what kind of power it can earn him, unlike the priests who know the truth behind it. But neither he nor the priest realise that their prize is under their noses, captured along with the living saint venerated by the Franks. The saint is given to the Odin priests, and something dark is awoken amidst the blood and fear of the ancient and terrifying rites they perform.

The answer to my question is yes, you can read it as a standalone, but it does slow things down, particularly in the first third as you try and get the cast of characters straight in your head. There are references which only someone's who's read Wolfsangel will pick up on, but you can soldier on through it. There's a lot going on, and the point of view switches back and forth between various characters,which really forces you to concentrate on what you're reading.

Lachlan teases the information out as each character's story is told, and weaves these threads into a complex knot that he slowly tightens as the wolf closes in on its prey. The characterisation is good, which is has to be given the cast of characters whose heads we get to look inside, and the action sequences are impressive, eloquently capturing the fear and chaos of combat. Despite it being a story heavily involved with ancient prophesies, gods and werewolves, it all takes place across real locations and maintains a very real, fantasy- free feel to it, a juxtaposition that I feel contributes a lot to the overall atmosphere and feel of the book.

Fenrir is a dark and complex story to get into, but it rewards those who persist with a rich tale seething with myth, deception and ready violence.