Worth Dying For by Lee Child 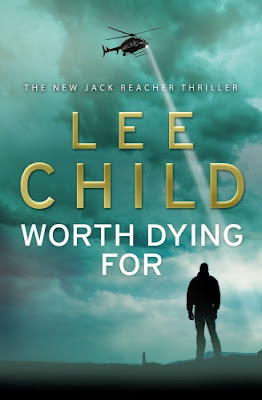 There's deadly trouble in the corn country of Nebraska ... and Jack Reacher walks right into it. First he falls foul of a local clan that has terrified an entire county into submission. But it's the unsolved case of a missing child, already decades-old, that Reacher can't let go.


The Duncans want Reacher gone - and it's not just past secrets they're trying to hide. They're awaiting a secret shipment that's already late - and they have the kind of customers no one can afford to annoy. For as dangerous as the Duncans are, they're right at the bottom of a criminal food chain stretching halfway around the world.

For Reacher, it would have made much more sense to keeping on going, to put some distance between himself and the hardcore trouble that's bearing down on him.

For Reacher, that was also impossible.

This was my first ever Jack Reacher/Lee Child novel and I've come to two conclusions:

The very first thing I liked about Worth Dying For is that there is a bio/CV on Jack Reacher to examine, even before you get to the story.  You are left - if you are a newbie like me - with NO doubt who Jack is...or rather, what he's capable of.  And I did wonder how I would end up identifying with this tough guy and if he was going to be so macho the book would drip with testosterone.  I was 100% ready not to like it.

I couldn't have been more wrong.

Jack got me on his side by doing a simple thing: he drove a drunk doctor to the home of a battered patient and forced him to administer to her.  Then Jack went, after dropping the doctor back home, to find the battered woman's husband and biffing him in the face, whilst he was at dinner with some mates.

From then on, which is really the start of Jack's troubles, I was telling everyone about Jack and what a badass he is.

Mr. Child takes his time to set up the story, how Seth (the guy Jack smacked on the nose) runs home to his dad and his uncles to tell them about this guy who came to hit him for beating up his wife and suddenly, all four Duncans have it in for Jack Reacher.

As Jack gets to know the small community of farmers in the area, whilst dodging the "Cornhuskers" (ex-football athletes the Duncans employ to intimate the farmers), Jack comes to realise that the Duncans have a strangle-hold on the community and if there is one thing Jack dislikes...it's a bully.

But the Duncans aren't just bullies who blackmail the local farmers into using their transport trucks to transport their harvested crops.  There is something else going on with them too and it's not above board.  This other business of theirs happens to come under threat because of Jack running around and they mention it to their business partners, citing Jack's presence as the delay in the delivery of the "goods".  These business partners in turn inform their business partners and so it goes up the supply line, until a group of out of towners descend on the small Nebraska town and things get very heated.

In the midst of all this, Jack is trying to stay alive and solve a missing girl's disappearance from over 20 years ago.  The little girl lived in the area and her mum lives a hand to mouth existence, mainly due to the Duncans punishing her for naming them in the investigation all that time ago.

I admire Lee Child for his writing prowess in this.  As readers we are shown the macro view and as the story unfolds the story becomes more and more focused and Jack's actions become deadlier and less random-seeming.  I loved how the story unfolds into an intimate expose of the small corner of Nebraska with Jack at its core, the spider unravelling the intricate web.  It is superb planning going on in the background and the only other writers I know of who can pull this off successfully is Stephen King in The Stand and It and Neil Gaiman in his American Gods.

Worth Dying For is a masterclass of thriller writing and I've become a fan of Lee Child, sort of against my will.  Even if I know I'm being manipulated, I can't help but fall for Jack and for rooting for him and luxuriating in the comfort he gives me knowing that he's out there. (I realise it's fiction, but still.  We all need a bit of Jack Reacher in our lives).  And that I think that is such an important experience for a reader - I'm not 6'6" and I do not have devastating martial arts skills or a Black Ops background, but I do have an inner sense of what is right and wrong and Lee Child plays those cards when he writes Reacher, and I believe it implicitly.

Enough gushing from me - if you've ever turned up your nose at a Lee Child, surprise yourself and buy one to read this summer, start with Worth Dying For because it just plain bloody good storytelling.

Jack Reacher's Newest Fan
Who wrote this? Liz at 8:54 am

Great review. I've read and loved a few of Lee Child's books, sounds like this one lives up to expectations.