On Books, Luck and Michelle Harrison

I'm a huge lover of books, obviously. Like most bloggers I get a bit overcome in bookshops and want nothing more than to take them home and look at them on my shelves. However, I also work in a library and on occasions I read a book that's so wonderful that I want everyone else to read it too. So, back in 2009, The Thirteen Treasures by Michelle Harrison came out which I read and loved. I went to work and was raving about it but when I checked our stock it was pretty low and the reservation list was long. I donated my copy to the library and often saw it passing through to new readers. I was happy that it was so popular but also felt a bit of a twinge as I sort of wanted it back at home, with me.

The thing is I firmly believe that books are made to be read and passed around, loved by new people so they can sometimes pass into book legend as a classic. So, the more dog-eared my copy became on each visit to my library I knew that it was on that journey. I did the same with the follow up, The Thirteen Curses, because I thought it should join its friend visiting homes. The last copy I kept because I had it signed and I only have so much willpower. Also, due to its success, more copies were ordered this time so I didn't feel too guilty.

But then the US copies came out and they were *gasp* hardback, beautiful and very shiny. 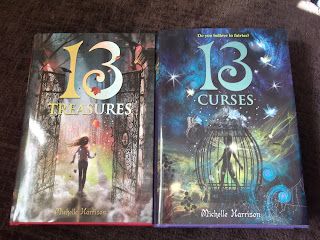 I saw a competition to win BOTH copies on Michelle's newsletter which I entered and then promptly forgot. But then I won!!! They arrived last week and are absolutely stunning, signed and dedicated to me. I don't think there's anything wonderfully deep about this piece of kismet but sometimes good things happen. I can stop staring woefully at my old copies which are still doing the rounds and clasp these new ones to me. These are staying with me, no discussion, the end. 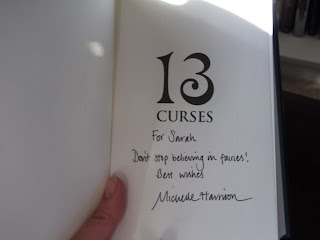 I'd like to say a massive thank you to Michelle Harrison for running the giveaway. Seriously, the last thing I won was a robot on Blue Peter which was great and everything but I was nine so … enough said.
Who wrote this? Essjay at 7:30 am

They are utterly gorgeous. Congratulations.

That's like karma! for giving your own copies away. And it makes me think i should put some of my horde of books back into circulation. Maybe not favourites though...

congratulations on the win, they are beautiful! I still haven't read the second two books in the series but I want my own copies as I loved the first one so much!