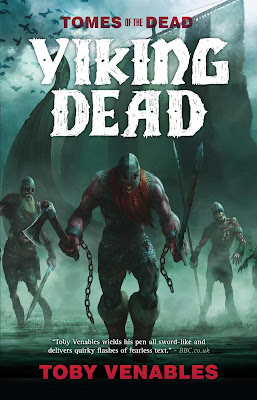 Northern Europe, 976 AD. Bjólf and the viking crew of the ship Hrafn flee up an unknown river after a bitter battle, only to find themselves in a bleak land of pestilence. The dead don’t lie down, but become draugr – the undead – returning to feed on the flesh of their kin. Terrible stories are told of a dark castle in a hidden fjord, and of black ships that come raiding with invincible draugr berserkers. And no sooner has Bjólf resolved to leave, than the black ships appear... Now stranded, his men cursed by the contagion of walking death, Bjólf has one choice: fight his way through a forest teeming with zombies, invade the castle and find the secret of the horrific condition – or submit to an eternity of shambling, soulless undeath!

Viking Dead opens with a young boy named Atli reluctantly making his way home, knowing that all he has to look forward to is a lecture and a beating from his abusive and small minded father. But then the mist rolls up the river, and through this veil emerges a dragon. And so we meet Bjolf and his crew as they prepare for what should be just another raid on a small village.

But the raid doesn't go to plan as they're ambushed by their bitter rival Grimmsson, and they're chased out into a storm wracked estuary, where they escape Grimmsson and find Atli stowed away. Fog follows the storm, and they gratefully head towards the first land sighted, however gloomy and unwelcoming its appearance. It’s here that they encounter the first of the walking dead that plague these lands, and they quickly flee the madness of that shore, but what lays before them is far darker and stranger than they could imagine.

The imagery in Viking Dead is strong, and builds a convincing and claustrophobic world around Bjolf and his men, who are likeable, normal guys (by Viking standards) who’re just out there trying to make a living. They aren’t out to be heroes, but as they begin to realise their predicament and are pushed to the brink by the horrors they are forced to confront, their uncertainty and fear turns to anger. Rather than find a way to escape the horror, they turn to confront it, to cut their way to the source of the taint. It’s a hard fight right to the end, a struggle that sees them coming up against several diehard zombie favourites as well as several new twists on these, including a truly diabolical use of zombie ants- a stroke of macabre genius I would love to see translated to the big screen one day.

Viking Dead was as much fun as I expected it to be. Come on, its Vikings and zombies! What makes it work once the initial novelty wears off is that their world has a very normal, Viking -era feel to it (no doubt a product of decent research) and a firmly grounded cast of characters which keeps it from straying into the realms of silliness. Bjolf is a great character, and the switches between his and Atli's perspectives work to create a nice picture of life as a warrior in his crew. The villain gets some attention too, though not as lavish, but it helps to provide some background.

The pace is good and while there's plenty of chaotic action, it's gritty and real rather than an over the top gore-fest. The ending might divide opinion, it worked for me.