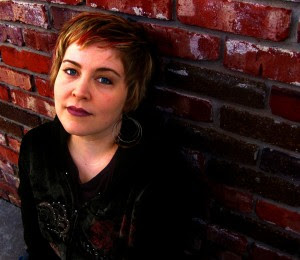 In June I reviewed the wonderful Blood Magic and was lucky enough to be able to interview Tessa Gratton too. Here's what she had to say: -
Hi Tessa and welcome to My Favourite Books.
Tell us about where your research for Blood Magic took you. What sorts of things did you find yourself reading?
I read a lot of books about body-snatching in Scotland, England, and the US, about American folk magic, the Pennsylvania-Dutch, and European Medieval magic, alchemy, and early frontier medicine. Most of that was all to develop my system of magic and the history of its practitioners.
Silla and Nick are both struggling with damaged pasts and are essentially true of heart yet Josephine is a nasty piece of work but conscience free. Why do baddies get to have all the fun?
LOL. Well, bad guys want the bad consequences! Those of us we try to do good most of the time have to be aware of the consequences of our actions, and take responsibility for them. You can’t ignore repercussions of something like blood magic (or getting into a car drunk, for example). For the good guys, it isn’t just about selfish fun.
Following on from this, you've done some brilliant videos of Josephine's diary entries. She's such a glorious character, how much did you enjoy writing/acting her part?
She was the most fun to write, hands down! I can do just about anything with her because she’s so free and just evil enough to do anything she wants! Acting her role was frustrating because I don’t have any clothes that she would actually wear – so I stressed about it! But once it was taken care of, I loved it. She’s delicious.
There are a lot of parallels between blood magic and self harm. Although Silla isn't self-harming she has lost weight, altered her appearance and behaviour. Did you worry that people would take the act of blood magic the wrong way?
I hope that readers will see that the issue is complicated – and it’s important to bring up consequences again, as above. You can’t do something without consequences. Whether that’s self-harm, blood magic, not eating, etc. Everything you do changes you, and you need to be aware of that. I do think the vast majority of readers are smart and savvy and will see the complications (and the fantasy), so I’m not terribly worried.
People are always quick to criticise subject matter in young adult fiction but Shakespeare often covered equally dark subjects. How do you feel about this?
I think that readers self-censor. If a teen doesn’t want to read about something dark, he or she won’t. And if they do, then my not writing about it won’t stop them. They can find it in adult literature and things like, as you mention, Shakespeare. There’s nothing I’m going to write that can’t be found on basic television or video games, either.

Will we see more of Silla and Nick?
Maaaaaybe. :D
Tell us about how Merry Fates got started. How do the three of you find time to write your short stories?
The three of us were critique partners already, and we all met online. I’d been giving away free fiction (short stories and a serial novel) online for about 2 years, and Maggie did an art project one year where she painted a complete painting every day. She suggested we do a similar thing with stories – that’s how Merry Fates was born. As for finding time, some days it was harder than others, but usually it was only a matter of discipline. You sometimes have to give up time from writing other things or an hour of TV watching! You find time for the things you prioritize, and we all prioritize writing and Merry Fates.
Thank you for again for taking the time to talk to us!
Who wrote this? Essjay at 7:30 am

I want to know more about Merry Fates. Is it a blog or website?