I love Harry Potter enough to be more than a little gutted that the last film has been and gone. Like so many of us, I've waited at midnight to buy the books, seen the films and pondered upon which house I'd be sorted into. So when Pottermore was announced I had mixed feelings. Sad that the news didn't herald a new book (I know, I know, it's never going to happen) but excited to see what J.K. Rowling had up her sleeve. So when I was offered a chance to go in on the first day I was overjoyed and a bit hysterical.


The wait for that email seemed to go on forever but at last I was in. My first impressions is that a serious amount of work has gone into Pottermore. It's visually stunning and the artwork is beautiful. You can pan in on each page which reveals more interactive material each time, areas which were once in the distance become the foreground. Once in you start at the Dursley's and follow Harry through receiving his letter to shopping at Diagon Alley. Diagon Alley is like a dream, it's just as I'd imagined it in the books. 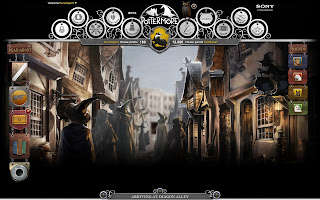 After a trip to Gringotts to get sorted for cash you're free to shop. I spent ages trying to decide which pet to get - seriously, there's a lot of choice. There's a shopping list of course and stuff to get. I adored my visit to Ollivander's Wand Shop where you answer a series of questions to enable your wand to choose you (British Oak, 14.5 inches, phoenix feather core, slightly springy). Before you know it you're on Platform nine and three quarters and off to Hogwarts.


Once at Hogwarts it's time to get sorted. You get to do this once and once only. First you watch a video from J.K. Rowling and then answer a set of questions some of which don't seem to point to any one house. I was expected to get sorted in Ravenclaw and was wondering if I might secretly want to be in Slytherin if only to get a proper look at their common room. Miraculously and quite to my surprise I was sorted into Gryffindor - yay! Once sorted you can then earn points for your house by finding things, duelling and other such fabulousness. Here's a look at what a your gateway page would look life if you were in Slytherin. This is your map, it tells you where you are in the story, messages and friend requests and enables you to enter your trunk, your vault at Gringotts and head off to Diagon Alley to do a bit of shopping. This is also where you can look at information you've marked as a favourite so you don't have to hunt around for it later. Quite a cool little page methinks. Mine's Gryffindor red though. 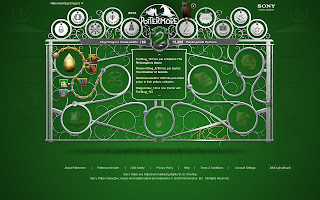 For me though the real highlight of Pottermore is the extra material. The sheer volume of back story and research that JK Rowling has done is staggering. I was touched by Minerva McGonagall's bittersweet story but I was also able to find out more about her parents, grandparents plus her post Deathly Hallows life (which made me a bit teary). The motivations of Professor Quirrel is also available alongside a thorough piece on the types of wood and cores used for wands. Fans of Ollivander will be able to discover the history of wand production and how he revolutionised the practice. We've always known that Ollivander was regarded as one of the best wand makers but now we know why. 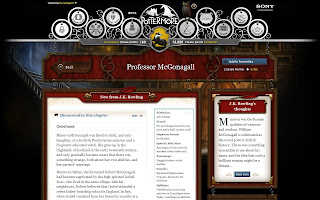 I found Pottermore incredibly distracting, diverting and beautiful. I think I spent a solid five hours on there yesterday, thankful that it was my day off work. I discovered that I'm seriously rubbish at potions making (obviously Slytherin wasn't for me after all). If you're looking for something to enrich the world of the books then this is it. Honestly though, actually reading the books will make the whole Pottermore experience more alive. I've no doubt that when everyone's able to enter in October it'll be a massive success I'm looking forward to investigating the rest of the books as they become available in January. Until then I need to find my last chocolate frog card so If you'll excuse me I'll be somewhere around chapters nine to fifteen.

And remember - Hogwarts will always be there to welcome you home.

Email ThisBlogThis!Share to TwitterShare to FacebookShare to Pinterest
Labels: Pottermore

Thanks for the report! I can't wait to get in; it sounds incredible.

thank you for making my wait for my own email even more torturing! lol... It looks amazing. I cant wait to get in! I want to be a Hufflepuff! :D

Raimy from Readaraptor Hatchling said...
This comment has been removed by a blog administrator.
17 August, 2011 21:41

Sorry, just deleted that last post as it was a duplicate - that's all!