The Misfits by James Howe 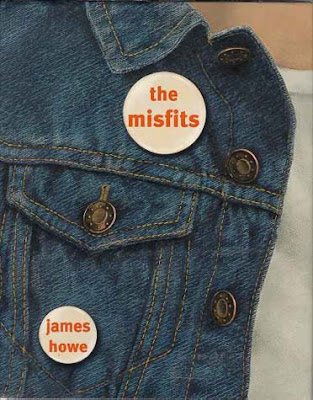 Sticks and stones may break our bones, but words will break our spirit.


Bobby, Skeezie, Addie and Joe have been called names for as long as they can remember.  They are the misfits.  Now, a school election gives them the chance to make a stand - to show how funny, clever and complex they really are.

I can't remember why or how I came by this copy of The Misfits.  I suspect it was a charity shop purchase from last year or so, and I cannot begin to explain to you how much I loved reading it.

In fact, I enjoyed it so much, I wish I could forget reading it completely, so that I can read it again and experience it again for the first time.

Hilariously funny, painfully honest and lip wobblingly teary, The Misfits blew my socks off.  I've read 2 other authors in the past who have affected me this much: Sherman Alexie and Francisco X Stork.  Two authors whom I hold in very high esteem.  And now I have another name to add to my little list of "must own everything they have ever written and will ever write".

But onto my review: Addie is sort of the defacto leader of The Misfits.  Although they don't call themselves that, they are The Gang of Five, even if they only have four members.  It keeps them mysterious, you see? She decides, one morning at school, to refuse to stand up to say the Pledge of Allegiance, claiming that she refuses to do so because there really is no freedom of speech, no real equality in their country.  This gets her sent to the principal's office.

This small act sets the small group of friends up to create their own group for the students to vote for - initially it was going to be called The Freedom Party, but Bobby has the bright idea, whilst they were sitting in the cafeteria during lunch the one day to realise that no, The Freedom Party is not the right thing after all.  They are to be called The No Name Party - because everyone at school gets called names: loser, faggot, fairy, fatty, beanpole, dweeb, dork, idiot.  And it is something that everyone can identify with, especially as name-calling is part of bullying.

The "political" machinations is only part of The Misfits' story.  Bobby the fat one" has this great relationship with his dad.  His mum had died when he was much younger and it clearly has affected him.  Bobby is also our narrator and it is through his eyes and his insights that we learn about everyone in the group.

Addie is "know-all, beanpole" who comes across as super bossy and well, a know it all, but she is a great character.  Super passionate about causes, she sometimes doesn't realise that her causes she wants to stand up for can be misinterpreted.

Joe is the "fairy, faggot" and his character is the sweetest, most charming of them all.  There is an amazing scene where they have just spent the whole afternoon and evening painting signs to put up at school, when everyone goes home and it is only Joe and Skeezie and Bobby hanging out.  And Joe has to break it to Skeezie that he is in fact...gay.  Skeezie questions him, wanting to know how he knows.  And Joe points to everything in his room, like the flamingo cushion on his bed and his paint scheme and slowly Skeezie gets it, but then, instead of reacting negatively to his young friend coming out, he says this: (and I apologise for putting the picture in here, I've never done it before, but this is probably my most treasured page in any book) 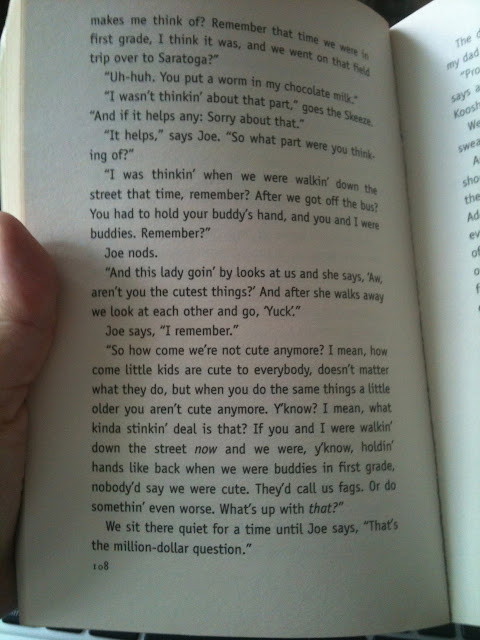 It is superb and I was laughing and crying at the same time.

Skeezie is the one everyone thinks is a waste of space, a loser, the villain, mostly because he dresses like a reject from an sixties gangster movie, complete with leather jacket and dirty jeans.  Skeezie is a superb character, really a romantic at heart, he maintains his tough nut outer shell and is probably the character most boys will be able to relate to.  He's not stupid, just bored.

The four of them, working together as a team, is superb.  Bobby tells us how they came together as friends and what they've been through.  But the story is about facing the future and realising bigger things along with the smaller things.

I cannot recommend this book enough - it is funny, sad, diverse, wild, subversive, fabulous and has instantly become one of my favourite books I've ever read.  I am pleased I did pick it up because it is books like this that lifts your heart and soul, just that bit on days when you need it most.
Who wrote this? Liz at 8:45 am

This book sounds amazing! It sounds so much like the kind of book I love, I think I might be about to break my book buying rules and order a copy.

wow! I must get this book! it sounds amazing!

That's just wonderful. I want to read it too!