Defenders of Ulthuan and Sons of Ellyrion by Graham McNeill 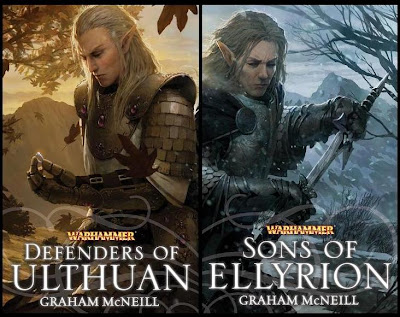 The high elves have long been the protectors of the Warhammer World, and their homeland of Ulthuan is known for the powerful magic that surrounds it. At the heart of Ulthuan lies a magical vortex, and the mages who created it remain trapped in a space out of time, endlessly working the spell that keeps the world from becoming a seething Realm of Chaos.

When Ulthuan comes under attack from the forces of Chaos and dark elves led by the Witch King and the hag sorceress, Morathi, the high elves must hold firm or face disastrous consequences.

Defenders opens strongly, quickly setting up the various threads that will combine to form the core of the story, which spans the final weeks before the Dark Elves launch their invasion of Ulthuan, the home of the High Elves.

Central to the story is the relationship between the two main characters, the brothers Eldain and Caelir, which is exlored and expanded on throughout the novel, giving them a depth and complexity that befits personalities that have been maturing for centuries, yet who still suffer from flaws and vulnerabilities that we can relate to. Eldain and Caelir set out on their respective quests across Ulthuan, and McNeill uses the opportunity to bring Ulthuan to life, from the soaring mountains to the endless plains and forests basking in a gentle, endless summer, all in all an idyllic, utopian setting. Importantly, he also manages to put across how intrinsically magical it is, a factor which is central to understanding the threat posed by Morathi.

Admittedly I did get to a point where I was having to grit my teeth at every mention of the Elves' beauty and impossible grace as they wafted across picture perfect landscapes. Fortunately it's a relatively short lived episode and the increasing tension as Morathi's plans begin to swing into motion cancels it out. What you're left with though is a clear image of what is at stake for the High Elves.

Defenders quickly builds up to a shocking cliffhanger ending, one which left me desperate to get home and start the sequel, Sons of Ellyrion.

SoE opens with the repercussions of Caelir's actions shaking Ulthuan even as the Dark Elf invasion gathers pace. As the title suggests, the brothers take central stage again, albeit that this time they share it with the heroes of their age - Tyrion, Imrik and Teclis. But there's carnage aplenty for each of them to deal with as the dark elves push deep into Ulthuan, slaughtering the living and despoiling the land, so it never feels crowded. The action is handled very well and is both plentiful and consistently savage as the High Elves reel under the onslaught.

These are very much High Elf novels, and the Dark Elves aren't given much 'screen time' outside of burning and killing their way across the land. Morathi herself seems to do little more than bathe in blood and gloat about her own evil genius. However, her evil genius is just that (with a generous helping of insanity) and her actions imperil not just Ulthuan but the whole of the old world. Eldain and Caelir are drawn into a desperate attempt to thwart her twisted ambition, and it's here that the care McNeill has put into making us care about these characters pays off, crowning the story with an emotional and bittersweet conclusion.

I finished both novels in a matter of days. Graham McNeill knows how to spin a story, and he's in top form with these. He manages to carry across a real feel for the Elven homeland and their society, whilst keeping it accessible to casual readers and without getting bogged down in too much exposition. You grow to care about the characters, and cheer the 'fuck yeah!' moments when they eventually happen amidst the bloody carnage (of which there's plenty). It's solid, satisfying fantasy action and a stark reminder why he gets to have the epithet 'NYT bestselling author' on the cover.
Who wrote this? Mark at 8:00 am