The Truth About Celia Frost by Paula Rawsthorne 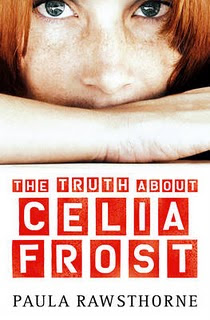 Celia Frost is a freak. At least that’s what everyone thinks. Her life is ruled by a rare disorder that means she could bleed to death from the slightest cut, confining her to a gloomy bubble of “safety”. No friends. No fun. No life. But when a knife attack on Celia has unexpected consequences, her mum reacts strangely. Suddenly they’re on the run. Why is her mum so scared? Someone out there knows – and when they find Celia, she’s going to wish the truth was a lie… A buried secret; a gripping manhunt; a dangerous deceit: what is the truth about Celia Frost?

I have an extra reason to have read TTACF - the writer is a fellow SCBWI BI member and she is one of the winners of the Undiscovered Voices competition SCBWI hosts every 2 years.

I have never met Paula and have only ever spoken to her via Twitter so I had no idea what to expect when I started on The Truth about Celia Frost.

When we meet Celia all we know is that she's to be treated delicately.  She has a condition that will make her bleed to death, should she be cut or hurt in a way that allows her to bleed.

This in itself freaked me out a bit.  Then, when Celia confronts the school bully and gets hurt and rushed to hospital I really did expect Celia to die.  But she doesn't.  Her mum turns up and acts very strangely indeed.  She grabs Celia and they run.  Not for the first time either, we learn.  They run to an estate that sounds as dangerous as any place I can imagine living in.

Celia starts wondering what exactly is wrong with her, the way her mum is acting, you would think she either had the plague or ... not quite sure what!

Slowly, but surely, we are let in on the fact that Celia won't in fact die when she is cut, but there is definitely something going on that sounds dangerous and uncomfortable.  But the reason is withheld for most of the book.  I wanted to rush ahead and figure out what exactly it was that's going on and had to be very strict with myself and read it at a decent pace.

By doing so, I got to enjoy the layered and complex story, written by a strong debut novelist.  Celia's character is not at all what you would expect - I fully expected her to be soft, malleable and a bit of a wimp and initially, there is a bit of that, but as she develops, and finds herself, her strengths and weaknesses and also her place in the world, she really does grow into a very believable, very strong character.

In fact, her character develops into quite a nasty piece of work for a part of the book, and yet, I 100% totally believed and understood why she was acting the way she did.  It sold the story and the writing to me more.

The secondary characters and the sub-plots are handled skilfully and well, you know.  Just go buy the bloody book and read it.  Great storytelling just does not get better than this.

A fast paced contemporary young adult novel written with such skill and ease, I have no hesitation recommending it to readers who would like something different, meatier and with a hint of Kelley Armstrong's YA series, sans the supernatural elements.

I've read some great reviews of this book, it sounds like such a good read.

This sounds a really thrilling read, I haven't heard of anything like this before. Great review!