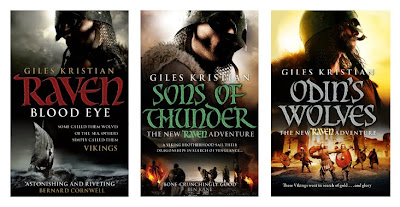 For two years Osric has lived a simple life, though he is feared and shunned for his mysterious part and blood-red eye. Then raiders from across the sea ransack his village and Osric is taken prisoner by this ruthless band of warriors.

Immersed in the Norsemen’s way of life and driven by their lust for adventure, Osric proves a natural fighter and forges a deep bond with their chief, Sigurd the Lucky, who renames him Raven.

But the Norsemen’s world is a savage one, where loyalty is often repaid in blood, and a young man must become a killer to survive. It seems the path Raven has chosen is a dangerous one indeed.
-

Wow. Yes, after much deliberation, that’s how I’ve chosen to start this review. Because that was the word which sprang to mind when I picked up the Raven Blood-Eye on a Sunday morning, and again when I finished Odin’s Wolves on the following Friday.

The first of the series is Raven Blood Eye, which introduces Osric/ Raven, and how he falls in with the Norsemen who arrive at the village that has become his home. Osric isn't a native Englishman, or at least he's not sure if he is since he has no memories older than two years. Then the Norsemen arrive and he discovers a talent for their language, which becomes the gateway for his induction into their ranks and a world beyond anything he ever expected.

The second book in the series, Sons of Thunder, leaves the shores of England for the continent as Sigurd and his crew chase the traitorous Ealdred to the shores of the Frankish empire- an empire sworn to eradicate heathens like them. What follows is a combination of Ocean’s Eleven and the Great Escape, Viking style, as Sigurd and Raven risk everything for honour, love and gold.

Odin’s Wolves follows Sons of Thunder, and sees the Sigurd’s fellowship turning their prow towards the fabled city of Miklagard, seeking to sate their appetite for treasure and, perhaps more prized than that, a good saga that will see their names and deeds live on through the ages. It’s no easy journey, and takes them through frozen marshlands and the shadows of what was once the glory of Rome, but nothing will truly prepare them for what waits for them at what could be their final destination.

It’s always a wonder when you come across books that hook you from the outset and only tighten their grip along the way until you can reluctantly peel yourself away from them at the end. If you pick these up, do so in the knowledge that you will miss your train station, and look up from the page to realise that the rest of the house is in darkness because “another 5 pages” turned into “another 5 chapters”.

The source of their addictiveness lies with the depth and dynamism of the characters and their interactions, particularly Osric/ Raven and Sigurd. They’re distinct personalities, each with their own foibles and aspirations, bound together by a sense of loyalty that transcends the oaths they’ve sworn. They and the camaraderie between them are realised very well, leaving little room for doubt that they would take the risks that they are. It draws you in until you’re completely immersed in their world and not so much reading about it as sharing it.

Raven’s world has been well researched and remains grounded in reality throughout the series. There’s a clear sense that the rest of the world will carry on regardless of what happens to them, cleverly contrasting the mean drudgery of the life that Osric may have led against the Vikings’ larger than life yearnings for glory and adventure and the clear sense of freedom that their way of life represents for all its dangers and deprivations. The gulf between the Norsemen’s pagan beliefs and the growth of Christianity adds to this contrast, and provides an additional level of understanding as to what makes them tick.

The series is written in the first person from Raven’s point of view, but this provides scant relief from the tension that is piled on as they continually push their luck, because this isn’t just his story. It all comes back to how you’re made to care about Sigurd and the rest of the Wolfpack, with the full knowledge that no character is safe. There’s plenty of action in each book as you’d expect, from shield walls to single duels, and I was impressed with how vividly these were portrayed, and how unforgiving the results were.

Whether you're a regular reader of historical fiction or not, read this series. It's fast, brutal, well researched, well written and an absolute blast.

Right, I'm off to sack a village.

I read the Raven - Blood Eye, but I completely disagree with you. That book was terrible...

Osric was nearly nobody at his village, but after 1-2 weeks/months(?) he is a hero, a talented, skilled fighter. I don't accept how fast he can convert his faith eighter. And we don't have to mention his relationship with Sigurd.

I was very disappointed after the first 100 pages, because the beginning was very promising. And you're right... easy to read from pages to pages, chapter to chapter, but the whole story is a little bit too much.