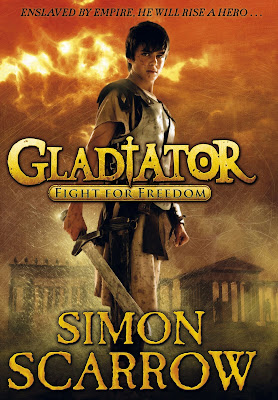 Rome, 61 BC
Recruited as a gladiator, young Marcus Cornelius Primus faces a new life of brutal training, governed by strict rules, as he learns the skills of an elite warrior.
But Marcus cannot simply forget his past. His father lies murdered by soldiers and his mother has been kidnapped and forced into slavery. Marcus is determined to find his father’s old commander, Pompeius the Great, to seek justice for his family and set his mother free.
Yet, unbeknown to him, Marcus is hiding a life-threatening secret. And if the Romans discover it, there will be no escape..
Fresh from the Rome fest of Vespasian, I was quite excited about Gladiator, given that it was penned by Simon Scarrow, whose Eagle Series has been top notch throughout. And besides, who doesn’t like Gladiators?
Gladiator opens well, with Marcus’ home under threat from a moneylender, creating some nice tension in the background as we get to grips with Marcus’ character. It’s a brief interlude before his journey into slavery begins, a journey that doesn’t offer any kind of concession for age or innocence.
That Scarrow is familiar with the Roman world is both subtle and obvious, even if you haven’t read any of his work before; it’s in the descriptions of life beyond Marcus’ immediate circle and the understanding of the casual disregard for slaves as anything except utilities.
However, as much as I wanted to really like Gladiator, there were a couple of bugbears I couldn’t quite work past. The first and most obvious is that it reads like Scarrow Lite, the rich narrative that won the Eagle Series so many fans having been diluted for a younger audience. And while I can sort of understand the reasoning behind it, I feel that it leaves Gladiator in a strange no man’s land where older readers could be turned off and middle grade readers talked down to. It is, of course, aimed at ages 11+, but I think that the ‘+’ is a very narrow range. The other, lesser thing was that I would have liked to have had more time spent on Marcus’ training, given the title et al; aside from the arena matches, that’s one of the things I was looking forward to. Of course, it could well be that this is something that will be picked up again later in the series, and I hope it is. Of course, and excuse the potential spoiler here, having him plucked out of the gladiator school after his first arena match could make this a bit trickier to pull off.
It’s a good concept with loads of potential, and while it's still a decent read, it needs more bite to make it stand out or realise that potential.
Who wrote this? Mark at 9:00 am

I need to read this soon. It sounds good!

I've looked at this one a time or two, but was never quite won over enough to leave the shop with a copy. I'll probably just keep it on the list of future possibles...