Daughter of the Flames, Zoe Marriott 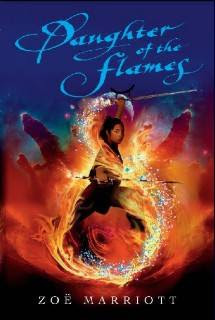 A sweeping fantasy chronicling a courageous girl’s fight for freedom in a world ravaged by war and religious fanaticism.
Zahira is a young woman of the conquered Rua people, their country occupied by another, very different culture – the Sedorne. Zahira is an orphan and has been raised to despise and distrust the occupying population, as well as to be a devout follower of the native religion. But everything changes for Zahira when her home and foster family are destroyed and she finds out some shocking truths about her heritage and real family. Realizing that it is up to her to do something about the violence and upheaval that are tearing her country apart, she must learn to accept her Sedorne origins and try to bridge the gap between the warring cultures. But when her own people suspect her of treachery for her ideas – especially after she saves the life of a Sedorne nobleman and begins to fall in love – the epic task ahead of her seems insurmountable...

This book roars with action, a heroine who knows how to use swords and kick butt, an insane king, a handsome noble and an impossible mission: overthrow the Insane King and somehow create peace between two peoples who have no reason to like one another.

I thought the book would be part of a trilogy. I did not expect the amazing Zoe Marriott to pull off all of the above in one book. And she does - she pulls it off wonderfully well. And I can only bow to her storytelling skills. This is a young adult novel with tremendous heart and soul.

The main character, Zira is such a nice girl with her head in the right place, that you root for her right from the start. Her actions ring true and once she discovers her true heritage I thought that the author was going to give us some deep and heavy introspection which would have slowed this racey novel down unnecessarily. But there was no sign of that - Zira's introspection is quick, logical and apt, suiting what we learn about her as a character. She is clever, resourceful and decisive, being able to take the good with the bad.

The king, the man behind the terror in the lands, is conveyed with diabolical ease and you almost like him. His explanation as to why he is the monster he is, makes you almost feel bad for him. But you get over it pretty sharpish as he is indeed a Bad Man.

Zira and her partner Sorin have a lot to cope with in this lone novel and I am reminded by Charles de Lint's words on one of the slender books he wrote : you don't have to write volumes and volumes to convey an epic story. Daughter of the Flames is the case in point.

It is an epic story, with battle scenes, political intrigue, tests of friendship and having to do the right thing, no matter what.

It reminded me of Lian Hearn's Tales of the Otori - of which I am a big fan. The story would find favour with readers who liked the above or who enjoy the Crouching Tiger, Hidden Dragon, Hero and House of Flying Dagger movies/graphic novels. There is an element of stories within stories here and like in CTHD, there is much more to the heroine than what you first see.

Daughter of the Flames is a thrilling action packed read. I've visited the Zoe Marriott's site (here) and I'm happy to see that there is a follow-up novel in the works to Daughter of the Fire - it is not a sequel, as such, but it is set a few years after the events of DOTF. I will make a note to check back regularly to see when it is released.
Who wrote this? Liz at 4:27 pm

I LOVED THE BOOK.
I just love the main character's energy and how she became a stronger leader as the events passed by.

I loved reading this book! I couldn't stop reading when I got into it! Thank you for writing such a wonderful story.