The Man With The Golden Torc, Simon R Green 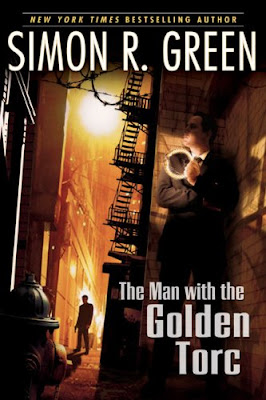 I wasn’t sure what to expect from a book with a title like this – my worst fear was that it was going to end up being the literary equivalent of the ‘Scary Movie’ franchise, a spineless rehashing somebody else’s ideas.

As it turned out, I had nothing to worry about. While giving a nod to the over the top antics of 007, Golden Torc is a clever, action packed adventure with a very interesting take on things.

The main character, Eddie Drood, is a field operative for the secretive and powerful Drood family, which he firmly believes is sworn to protect mankind from the evil and /or otherworldly, a task made easier by their supernatural ‘living metal’ armour and array of fantastic weapons.

Then, for no reason, his world is turned upside down- declared rogue by the Droods, he’s a wanted, hunted man, pursued by enemies powerful enough to level city blocks without breaking a sweat. He needs answers – fast- and to do that, he’s going to have to cross lines he thought were inviolate, to find shades of grey in what used to be a black and white world.

His road to the startling revelations that await is littered with enough bullet casings, bodies and burning wreckage to make John Woo’s films look like a Blue Peter presentation. Accept Golden Torc for the rampaging beast it is and you’ll enjoy the ride- I did and I can’t wait to lay my mitts on the follow up (it's part 1 of The Secret Histories), Demons Are Forever!
Who wrote this? Mark at 10:58 pm

Sounds good. I guess it goes on my to try list too, which is growing faster than I can buy at the moment.