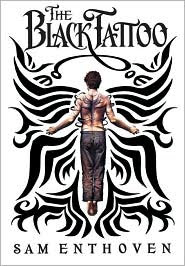 AN ANCIENT EVIL HAS BEEN UNLEASHED. NOW ONE BOY'S RAGE COULD DESTROY US ALL...
Jack's best mate, Charlie, has always been effortlessly cool. When Charlie wakes up one day and finds a mysterious, moving BLACK TATTOO on his back, it's a clear sign that he's even cooler than Jack thought. To top it off, Charlie is suddenly able to fight like a kung fu master, fly, and control the minds of others. Yes, he's got super powers.
Or does he?
Jack soon learns the terrifying truth: Charlie's incredible powers come from an age-old demon called the Scourge, who is using Charlie to bring about its evil masterplan. To stop the Scourge, Jack and Charlie join forces with Esme, a girl with super powers of her own, trained from birth to fight the demon. But time is running out, as Charlie falls deeper under the Scourge's dark spell.
When the Scourge vanishes with Charlie, Jack and Esme follow their friend from the streets of London into Hell itself, where they face horrors that may well cost them their lives. Can they survive to outwit the Scourge, save Charlie, and stop an even greater evil?

I picked up The Black Tattoo last year from Waterstones purely because of the incredible cover. I had to have it. And I'm glad I bought it as reading it was tremendous fun.

It is a YA book set in modern times and more specifically it is set in London, all around the West End. Even more points scored on my little card.

The story starts with Charlie going to meet his dad in China Town, dragging Jack with as a buffer. Charlie's dad has moved out and Charlie is genuinely struggling to cope. He is angry, he feels betrayed and he wants to hurt someone right back. Jack hangs back, unsure of how to react in this situation. He is torn between supporting his friend and his respect for Charlie's dad and his own concerns.

Charlie's anger calls to the dark powers and in a bit of tricky writing, worthy of Hollywood theatrics, Charlie's chosen to host the Scourge. Jack and newly made friend Esme decide to follow Charlie into Hell to save him from the Scourge and to somehow try and destroy it.

The book genuinely tears along at a tremendous pace. It starts a bit self-consciously, admittedly, but then you fall into the way the Charlie and Jack interact with one another and you realise that it is because of these two characters that the writing seems a bit self-conscious. They are two young lads, aged fourteen, with the world at their feet, the troubles of the world on their shoulders, because no one has ever been through the amount of crap they've been through. Sam Enthoven, the author, takes these boys in a time of high emotional volatality and dumps them in the worst possible situation, testing their friendship and their mettle. Throw in the mysterious butt-kicking Esme and rivalry rears its ugly head.

The scenes set in Hell are hilarious and written very tongue in cheek. I quote the back of the book, to give you an idea:

The creature had reared up in its true form, a frozen man-sized explosion of pink custard-like stuff. It wobbled and shook. Big bubbles formed and popped on its skin, belching out words.
"Fresh!" it burped. "Fresh meat! Fresh meat!"
"Whatever." Said Jack - and sighed. Yep, he thought. Gang up on the new guy. In some ways, when it came down to it. Hell was really predictable...

Need I say more? And I have to say, this is one of the coolest marketing gimmicks I had seen for a while: http://www.theblacktattoo.com/images/scarytatpic.jpg
I was lucky enough to secure a fantastic interview with Sam, please see the next post.
Who wrote this? Liz at 12:02 pm