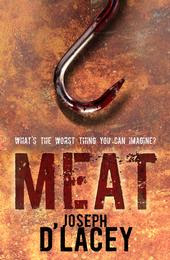 I think the girls and boys over at the smaller indy publishers are really taking their time to find good quality horror and thriller fiction and for a lack of a better word, alternative fiction.

Case in point is Joseph d'Lacey's book Meat which has been published to critical acclaim by Bloody Books. People have a strong reaction to it - they either love it, or they hate it - either way Joseph's work is getting a strong reaction and it has people talking. I, personally, have not had a chanced to read it yet - but I will.

Joseph and I have been chatting via Facebook and he comes across as a funny guy with oodles of talent and he shared some incredible news: Meat has been optioned for a movie.

This is the article over at his Myspace page if you want to read it and comment, but below is the text copied across from there for those who might have problems accessing Myspace.

The situation is this:

About six months ago, when MEAT first hit the shelves, I was approached by an independent UK filmmaker who wanted to option the novel. Believing the book was going to be HUGE, I told him I'd think about it. On the one hand, I hoped someone in Hollywood might get wind of it – rumours at the time were that a player in LA had a copy and was spreading the idea around. On the other hand, I felt that if a screen version of the novel was to be made, I wanted it to be a British movie: grim locations, grim actors and grim realism.

So, for a long time, I did nothing. Perfectly normal behaviour for me.

I soon realised no interest was coming from the States – not even for publication rights. The UK producer, the scriptwriter and I met again. And then again. They seemed very serious and I told the producer to make me an offer. There was another long wait and then another meeting. The offer was on the table.

At that point I decided I needed a lawyer and found myself a heavy hitter. We made a counter-proposal which was counter-proposed. We then ironed out the final wrinkles. Today, I met the producer and scriptwriter again and we popped the champagne. The deal is finalised.

By the end of November we'll have a first draft treatment. The hunt for financiers has already begun, as has the compiling of lists of possible directors and the cast. Sales agent and visits to film festivals to follow…
I really do wish him the best of luck!
Who wrote this? Liz at 11:43 am