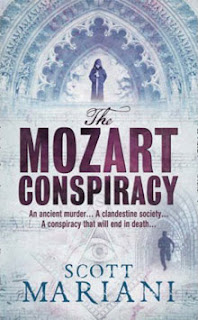 Who really murdered Wolfgang Amadeus Mozart in 1790s Vienna? Was he poisoned by a jealous rival composer? Was he killed for breaking the Freemasons’ code of silence? Or was a shadowy historical Order somehow involved in his death? Was the bizarre and brutal murder of pianist Oliver Llewellyn two centuries later somehow connected?
These are the questions facing troubled former SAS soldier Ben Hope in a breathless quest to find the killers of his friend Oliver. At the centre of the mystery lies an old letter, rediscovered after many years, which may or may not have been written by Mozart himself.
From the city of Oxford to Ravenna, Venice, Vienna and the snowy mountains of Slovenia, Ben and his old flame the world-famous opera singer Leigh Llewellyn must race across Europe to uncover the truth and stay one step ahead of a determined group of killers bent on erasing all trace of THE MOZART CONSPIRACY…

I received my second Ben Hope adventure from Avon recently and this week, finding myself in an adventure reading mood, because of the new job, I couldn't resist this attractive looking book and it's premise.
I genuinely thought, in Scott Mariani's first book, that he dropped his main character into a whole world of trouble. I expected The Mozart Conspiracy to start of slowly and build up. I thought Scott would take it easy on Ben.
He doesn't. Boy, does he pull the rug from underneath Ben's feet and literally have him on adventure mode right from the start. I loved it! I seriously did - I'm not saying this out of loyalty to the author or the brand or anything of the kind. It is written in a filmic way, with short concise scenes that move the story along at a cracking pace.
Scott's writing, although it was good in the first Ben Hope adventure, has lost it's bit of hesitancy in this, the second adventure. You immediately pick up how comfortable he is with Ben, the storyline and the surroundings. He seems to sit back and let the story flow, like a good writer and ref should.
The plot is tight and puts paid to the rambling adventure novels like the Bourne books. Here you know exactly what's what and you can't help but enjoy it. I knew Mozart used to be a Freemason, mostly because of Falco's song back when I was growing up called "Rock me Amadeus". I've never watched the movie, Amadeus and knew little enough about the composer or his life. The way Scott Mariani conveys the story, bit by bit, as you watch the characters put it all together is good fun - the suspense and thrilling adventure is cranked up to a scale of John Woo.
Again, this is very filmic and if you are a fan of adventure stories, be they movies or books, this is definitely someting for you. There are "boy bits" to the book - expounding on guns and fight scenes - but then there is the mystery, suspense and research bits to it. It really forms up very well into a strong read and I'm even more in love with the tortured Ben Hope who, you have to say, sounds like he could put the world to rights, if he had the chance to. We leave Ben at the end of the book in quite a state and I have to say, I was shocked. Shocked by what happened at the end and the twist in the tale. But it did not detract from my enjoyment.
All in all, a worthy follow up of The Alchemist's Secret. The supporting cast is brilliantly chosen and Leigh, Ben's first love, is a pleasant surprise and I genuinely enjoyed reading her. The grumpy cop, Kinski, excells at being what a cop in these novels should be: stubborn, grumpy, good at what he does, and prepared to walk that very thin line between being a bad man for a good reason or just plainly being a bad man.
At the end of the novel is a fun interview with Scott Mariani and I am happy to report, the next Ben Hope adventure is in the process of being put together. Hurrah! Again, this is Scott's website and you can find Avon's site here.
Who wrote this? Liz at 3:25 pm