The Summoning by Kelley Armstrong 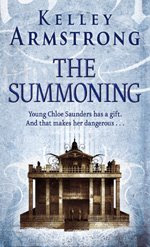 The Summoning by Kelley Armstrong has been out for a little while now and I eventually gave in to my impulse to grab it to read as I am a big Kelley Armstrong fan. If you have read Exit Strategy, her foray into the world of crime, you will know that she is as brilliant at writing crime as she is at writing her urban/paranormal fantasy novels. The girl has no end of talent and it is shown at how easily she conquered writing for the YA market.

In The Summoning we meet Chloe Saunders who is on the face of it a seemingly normal fifteen-year-old teen with her head screwed on properly. She would like to have loads of friends, lead a normal life. She comes from a well-to-do family; her dad is forever travelling so she has had a large contingency of housekeepers who look after her as she grows up. One constant is her mother’s sister, Aunt Lauren, who is acts as a mother figure throughout the novel. Chloe is an avid movie fan and would love to be a movie director or scriptwriter. Situations in her life she finds hard to quantify get broken down into movie scenes and dealt with accordingly. To great success, I might add.

In fact, all seems normal, almost quiet. Chloe is a fun main character and initially you’re not quite sure how things are going to play out, how will the author rock this girl’s world? Then we find out that Chloe sees ghosts, as clear as day. She hears them speak to her, she sees them and as it would do so with anyone who has not really grown up in a world where the paranormal is part of the mundane, it freaks her out.

She gets carted off to Lyle House, a place for troubled teens. The diagnosis comes in: Chloe suffers from schizophrenia. And it is to the author’s credit how well she deals with this diagnosis, how much she reveals of Chloe’s feelings and the impact she has on the other residents of Lyle House and in turn, how they react to her. Naturally things are not as they seem and it was only a little while into the book, as part of the reveal, that I discovered that the book is written and takes place in the Otherworld, the groundbreaking world-concept which Kelley Armstrong put together in her adult series Women of the Otherworld.

Having said that, you don’t have to have any knowledge about the adult books to thoroughly enjoy The Summoning. Through Chloe we learn that Otherwordly creatures do exists: necromancers (no, not the DnD gamer version of necromancers), witches, werewolves, sorcerorors and half-demons. And to give Kelley Armstrong her due: the girl can tease and cajole you along a story like very few authors can. Just enough of Chloe’s heritage is revealed, along with the story behind Lyle House, conspiracies, the appearance of more supernatural creatures to variously aid and hinder her and her friends’ quest to seek out the truth, to leave you wondering what exactly is going on here. And how does the author expect us to stand the wait between books without going slightly mad?

The book ends on a tremendous cliff-hanger and left me aching for more. So I went searching online and found the website Kelley has put together for the Chloe Saunders (Darkest Powers) trilogy she has planned. You can find the site here with Kelley’s main site here.

The Summoning is a tautly written YA novel which manages to deal with all the concerns a teen experiences growing up, and heaped up ontop of that, they have to deal with being truly unique and different. To Kelley Armstrong's credit she doesn't baby her teen characters - they are raw, genuine and the situations they get entangled in is enough to flatten most adult characters. I cannot wait for the rest of the series!
Who wrote this? Liz at 8:46 am