Admittedly, not really about books...but it is, in a roundabout way. This article has been copied across from Publishers Weekly website which can be found here - the pictures are sourced by moi.

The multimillion-dollar video game franchise, Prince of Persia, is entering a new generation in November with a new game for the Playstation 3 and Xbox 360 and a forthcoming feature film adaptation from Disney Studios in 2009. But a graphic novel, created under the supervision of the game’s creator, Jordan Mechner, and published by Macmillan’s graphic novel imprint First Second, will kick off this new generation of the Prince of Persia franchise when it’s released in September.

First Second is rolling out the Prince of Persia graphic novel with a first print run of 125,000 copies and a $100,000 marketing campaign. First Second editorial director Mark Siegel expects a big sell-through and noted that the various editions of the video game sell millions of copies—each version sells "roughly three million copies, on the low end,” he said. The book has already been licensed to such European countries as France, Italy and Spain.

The Prince of Persia game is a first-person game similar to the "choose your own adventure" books of the same era. Heavily influenced by the book, One Thousand and One Nights, the game follows the story line of an orphaned prince who must rescue his imprisoned princess from the villain Jaffar. The game is played in real time, with the player given 60 minutes to save the princess.

Illustration for the book was done by the husband and wife duo, LeUyen Pham and Alex Puvilland, both of whom work with Dreamworks studio. (Pham has since left Dreamworks to pursue children’s book illustration while Puvilland continues to work at the studio.) Siegel, an award-winning cartoonist himself, and Mechner both oversaw the process of adapting the franchise into a work of comics storytelling.

First Second marketing director Lauren Wohl said that the house is working with three different communities for selling the book. “We have a lot of different venues for marketing this book,” she said. The three she’s targeting include bookstores, both independent and chain retailers, with Mechner making appearances at BEA as well as at the Hollywood and Miami book fairs. Wohl is also working closely with Diamond Comics Distribution to reach the comics shop market, as well as such chain retailers as Game Stop, Wal-Mart, Best Buy and Target. “There is almost a feeding frenzy for the new Prince of Persia game.” she said.

First Second will also cross promote the book with video game developer UbiSoft, offering a limited edition Prince of Persia game, which will include a booklet containing exclusive material including an interview with Mechner and writer A.B. Sina There will also be an animated book “trailer” for online venues like game Web sites and book Web sites—including the First Second Web site.

Mechner told PWCW that working with First Second’s small creative team reminded him of the early days of developing the Prince of Persia game, in comparison with today’s video game development. “These days, the Prince of Persia games team ranges from 25 to 50 people, and it takes from one to three years to create. It’s a massive multimillion-dollar production similar to film production. You’ve got a team of artists, animators, sound designers, engineers and people in specialized positions like level designers, camera artists and textures artists.” But, Mechner said, “back in 1989, the game was me—programming the code, doing the animation and writing the story. That felt very much like doing a graphic novel, one person writing and drawing.”

Mechner, a die-hard fan of French comics, known as bande dessinée, said that he’s “loved comics for longer than video games have existed.” He even dreamed of creating his own comics before Apple computers came along and “diverted my attention for 25 years.” His next graphic novel, Solomon's Thieves, will also be illustrated by Pham and Puvilland. Sina is currently crafting his own new script for the duo as well, and both books will be published by First Second. “I want to keep working with this team as long as they want,” Siegel said. 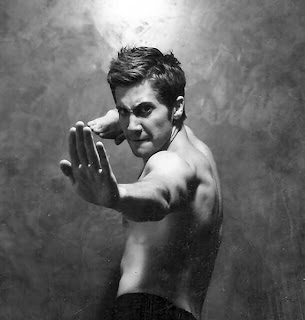 The Prince of Persia movie is from Disney Studios, produced by Jerry Bruckheimer and directed by Mike Newell, who also directed the blockbuster film Harry Potter and the Goblet of Fire. Actor Jake Gyllenhaal will play the prince, and the movie is slated to open in June of 2009.
Who wrote this? Liz at 11:50 am

Email ThisBlogThis!Share to TwitterShare to FacebookShare to Pinterest
Labels: geekgasm