The Wheel of Darkness, Douglas Preston and Lincoln Child 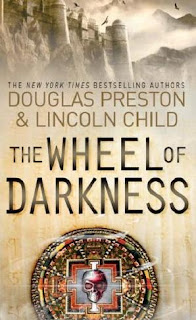 Perched like a black crow on a crag in the most hostile depths of the Himalayas stands a monastery. For a thousand years the monks have kept guard. Now their sanctum has been violated, the secret carried off. After a millennium of hiding from the world, the guardians of the treasure will have to turn to an outsider for help. Luckily Special Agent Aloysius Pendergast is no stranger. Having trained body and mind in Tibet, he knows the land well. But neither he nor his ward, Constance, are prepared for the truth about what the monks have been protecting. The pursuit of the stolen artefact takes Pendergast and Constance far from the snowy wastes, to where the largest-ever ocean liner is preparing for her maiden voyage. As Pendergast and Constance board, they know they are joined by a cargo of secrets and murderers. As the ship slips into the night, it becomes a deadly race to recover the secret of the monks, or blackness to threaten to fall not just over the ship, but the wider world A stunning dance of death and mystery, THE WHEEL OF DARKNESS takes the most unusual investigator around on his most thrilling case yet.

I have personally never come across any of the Aloysius Pendergast novels before and didn't realise that there were others until I opened this book hastily purchased from Waterstones because the premise sounded so much fun.

I found it a fascinating read and did enjoy it, but it is not a book I felt connected to. I didn't like Pendergast of his niece Constance as I had no frame of reference for them. The dialogue was odd, outdated, whilst the story itself was set in modern times. It was as if these authors were doing their best to create someone and something so very unique that they lost sight of the fact that being a special investigator for the FBI was pretty darn unique in the first place.

The settings were interesting, but again, very hard to believe. You can spot a lot of influences here: James Bond shenanigans, Agatha Christie classic murders and situations not too far different from the Titanic with a bit of Mutiny on the Bounty thrown in. You never actually find out why it is that Pendergast has so much cash to throw around or why Constance is such a miserable person. All hooks for earlier novels and other novels yet to come, no doubt! And therefore a bit sneaky, making me feel cheated.

I don't regret buying the book - it will stay on the bookshelf and I will probably get the other preceeding novels, just to assauge my own curiosity, but sadly I can't wholeheartedly recommend this as a good standalone novel to read. The references escape me and I find the odd way they deal with a crisis - sink into deep trance-like meditation - a bit hard to swallow.

Therefore, a warning: read the other Douglas Preston and Lincoln Child books first before tackling this, their eight novel. It will probably make more sense and the superior Agent Pendergast might be less annoying by then.

This is the Preston Child website.
Who wrote this? Liz at 5:07 pm