Tom Scatterhorn and The Museum’s Secret by Henry Chancellor 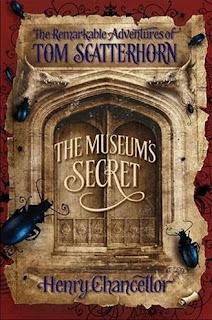 About the novel: Welcome to the Scatterhorn Museum! But don't get too excited - it's a cold and dingy place, crammed full of tatty stuffed animals and junk. Nobody much wants to visit any more, and its days are surely numbered. But when Tom is sent to live here he soon finds there is more to this museum than meets the eye. The animals may be shabby and moth-eaten - but they possess an incredible secret. And when Tom discovers he can go right back to the time of their making, a hundred years earlier, he embarks on a journey full of unimaginable terrors...Join Tom in his breathtaking adventure in and out of time, from an Edwardian ice fair to the wastes of Mongolia, the jungles of India, and beyond...


Tom Scatterhorn and The Museum’s Secret is an all out boys adventure. Poor Tom, I really did feel sorry for him. He gets fobbed off to his aunt and uncle, who look after the Scatterhorn museum, by his mother who goes on a quest to discover what had happened to his father who had disappeared off to Mongolia to do research about bugs.

Ech. Is all I can say. Bugs. And I am happy to say, it doesn’t just stay at bugs. We have a menagerie of wild animals at the Scatterhorn Museum. A mysterious Bad Man by the name of Don Gervase and his daughter Lotus. They are all involved in something dark and very weird – so weird that it really took me by surprise.

The story itself is well written and Tom is a likeable character. I was not entirely fond of his aunt and uncle who really both did deserve a slap against the head as they took very bad care of the museum, letting it fall into bad disrepair and they don’t take much care of Tom either. This of course allows Tom to have several adventures and he quickly realises that all is not as it seems - nothing about his life or the museum.
Who is the mysterious Don Gervase and his odd daughter, why is there such enmity between the Catchers and Scatterhorns and is there really a fantastic jewel hidden away somewhere in the museum.

Combined with time-travel to the past, where Tom meets an ancestor and the chap who had created the now moulding stuffed animals in the Museum. The author teases the story out with an adept hand and drops poor Tom into several scrapes and adventures right through from the Museum to the jungles of India. The story rushes along at a good pace and I genuinely enjoyed it for its matinee goodness. It is a bit odd and quirky, with just enough of a skewed slant, to be filmed by the likes of Tim Burton or Guilermo Del Toro or, on a good day, Terry Gilliam.

I loved the story, the style of writing is easy to read and Tom is a good fun character to follow on his adventures. My only gripe is the aunt and uncle who are a bit irritating. The Bad Man is indeed very evil, deliciously so and I am looking forward to finding out what else he’s going to throw at Tom in the novels that are yet to come. The story is however, very much a read for youngsters. I am keen to see Tom grow in character as his adventures develop and to see him grow up.
Tom Scatterhorn and the Secret of the Museum is released on the 4th of September and is published by Oxford Univeristy Press.
Who wrote this? Liz at 9:45 pm