Into the Woods by Lyn Gardner 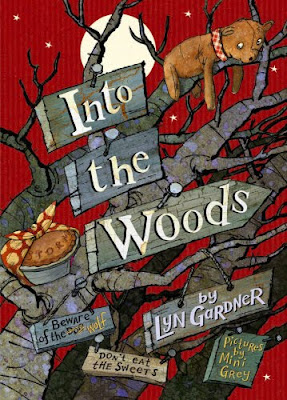 Taking inspiration from numerous fairytales and weaving them into a wholly original story, INTO THE WOODS is a whirlwind of a novel, full of imaginative happenings, dastardly deeds and thrilling adventure.

Our guides are sisters three: Storm, Aurora and Anything Eden. Accidentally orphaned and left to fend for themselves in a decaying mansion on the edge of the wilds, they come to the very much unwanted attention of the sinister Dr DeWilde: a scar-faced gentleman with a pied waistcoat and an unhealthy interest in rats. He's after a tiny little musical pipe that Storm has inherited, and he'll stop at nothing to get it.

Fleeing into the woods, our courageous and eccentric sisters evade kidnap (almost), resist the temptation of sweet-filled orphanages (nearly!), and begin a treacherous journey across raging rivers, over mountains of ice, through deathly silent ghost towns and beyond the lairs of child-eating ogresses. With ravenously hungry wolves snapping at their heels every step of the way!

Featuring wonderful illustrations by award-winning illustrator Mini Grey, INTO THE WOODS is a classic tale with a very modern twist and will delight readers of every generation.

I had doubts about Into the Woods. I looked at the cover (done by Mini Grey) and the artwork within and thought: am I ready for this? It looks incredibly twee and I'm not fond of twee. I girded myself and stepped in.

First of all, Into the Woods is anything but twee - actually, I should quantify that and say I thought it would be self-conscious and purposefully sweet and ditzy. All because of a) the cover which I didn't initially like and b) the actual write up on the story, making me think it was going to be a parody of some fairy tale.
However, within the first few pages I realised that my preconceptions was once again WRONG. It is dark and humorous and probably too clever for its own good.
I spent a lot of time checking out the artwork by Mini that accompanies the written words on the pages. Clever little drawings that enhance the overall narrative and gives the reader a chance to discover more about the story they are reading.
Storm is the character in the book I identified with the most. She is wild, impetuous, seems to know better but often does not, and is a bit dangerous to know and obsessed with firecrackers. She also doesn't listen to her sister Aurora telling her not to go into the forest which is dark and dangerous. Aurora is a studious daughter, taking care of the household whilst her mother languishes and sighs to herself. Their father is equally rubbish at being a parent - wrapped up in his various quests to find mythological creatures. He really annoyed me and I disliked the girls for making excuses for him when he literally crumpled after his wife died in giving birth to Any. Then he stayed around for a bit, after Any's birth, but he was no use to anyone. Then he disappeared off on another quest by himself, leaving the very young girls with no money and no one to take care of them!
But then, Aurora and Storm are no ordinary girls. Storm's adventures are crazymad and she dislikes being cooped up. During one of her previous rambles, she discovered that the nearby town has hired a nasty man called Dr. DeWilde to get rid of the rat infestation. The doctor uses his trained wolves to pounce on and kill the rats in question - not pleasant. But there is something very odd about DeWilde and Storm senses it. It's not long till DeWilde comes to their house to ask them about a flute/pipe which Zella, their mother, had given over to Storm for safekeeping on her deathbed. The fact that she chooses Storm to be caretaker of this flute is significant and although Storm is initally charmed by the flute, she doesn't have much use for it and soon it is lying in the pantry, gathering dust.
And from there onwards, we have the girls thrust into all manner of nasty situations that reads like mish-mash of fairy tales from Grimm, Carter, Perrault combined. There are witches, an ogress, lots of wolves, narrow escapes, mountains to climb, villains to see off and a sister (or two) to rescue. It's a busy story and once things were being laid out I thought that I may get lost in all the adventure, but I'm happy to report that each bit of adventure is it's own adventure - does that make sense? - and that the plotting of the overall story is very good.
It didn't take me very long at all to fall for Into the Woods and Lyn Gardner's writing. It's charming and funny with larger than life villains and some utterly over the top situations blended with smatterings of the familiar fairy tales we all know and love, so well.
I'd recommend this for readers say 11+ who like their heroines unconventional and the storytelling vivid and bright. I'd also hasten to add that although the book has three female characters as leads, it is a very boy-friendly book, from the adventure aspect of it all, along with the creepiness that sometimes rears its head. And there is fighting and explosions. Because this is Lyn Gardner, after all.
Into the Woods and it's companion novel, Out of the Woods, is out now from Random House. I'll also be reviewing Out of the Woods and I'm very happy to have Lyn on the blog tomorrow as she's written us an amazing guest blog. So stick around for that.
Who wrote this? Liz at 9:25 am

I actually got that book today from the library and am very eager to start reading it,i was interested beofre,but now I'm doubly interested

Im reading this book now and i love it !!!