The Grimm Legacy by Polly Shulman 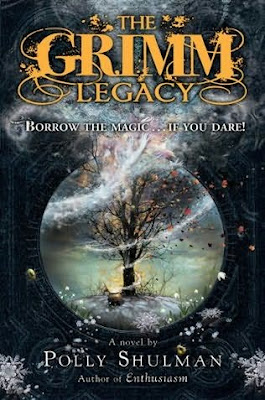 Lonely at her new school, Elizabeth takes a job at the New York Circulating Material Repository, hoping to make new friends as well as pocket money. The Repository is no ordinary library. It lends out objects rather than books—everything from tea sets and hockey sticks to Marie Antoinette’s everyday wig.
It’s also home to the Grimm Collection, a secret room in the basement. That’s where the librarians lock away powerful items straight out of the Brothers Grimm fairy tales: seven-league boots, a table that produces a feast at the blink of an eye, Snow White’s stepmother’s sinister mirror that talks in riddles and has a will of its own.

When the magical objects start to disappear, Elizabeth and her new friends embark on a dangerous quest to catch the thief before they’re accused of the crime themselves—or the thief captures them.

I'll admit it.  I bought The Grimm Legacy for 2 reasons: 1.  That cover!  It's gorgeous and I had to have it.  2. It's about fairy tales, objects from fairy tales and in a way, about the Brothers Grimm, whom I'm very fond of. So, of course, TGL had to be mine.

Elizabeth, our main character in The Grimm Legacy is someone with an adventurous spirit, although it is a hesitant adventurous spirit at first.  We meet her as she's handing over her trainers to an elderly homeless woman who is walking in the rain and snow with no shoes of her own.  One of her teachers sees this and decides to give Elizabeth a number to ring for an appointment. It's for a job at the New York Circulating Material Repository.  Her interview is odd, to say the least.  She has to sort hundreds of buttons. But whatever she does, she does it right and she's accepted to work there as a Page and runner in the library.  Naturally she's very excited about this, a bit clueless about what it all means, but enthusiasm makes up for a lot.

Elizabeth lives with her father and step-mother.  There are two older step-sisters but they are both at university.  She is close to her dad but he's very much the absent parent in the book, choosing to spend time with the step-mother, redecorating their apartment or out at work, so we never really get a sense of them being much of a family or of the dad really being part of Elizabeth's life.  This really is the whole Cinderella aspect of the story, added to the fact that Elizabeth doesn't see herself as attractive.  She has very no friends to invite around or sit with at school.  She has a great many chores to do, with her step-mother occasionally reminding her to do something, although we never actually see her doing any of them and if she didn't do them, there were no repercussions.  If this was a way for the reader to feel empathy towards Elizabeth and her situation, it really didn't work.  I never felt genuinely sorry for her and it detracted from the story for me. I also felt that I never really got to know Elizabeth well enough to deeply care about her so me rooting for her and her friends during their adventures fell flat.

Her initial crush at the Repository is the basketball playing Marc Merritt who had the potential of being someone very cool but again, I just couldn't engage with him.  He acted in a nefarious way several times, so there was a lot of doubt about his honour but it got cleared up and explained away and I sort of liked him then, but only for a little while.  He of course was not interested in Elizabeth at all, having fallen for the very beautiful and seemingly perfect Anjali, who was also a Page at the Repository.

Anjali is the direct opposite to Elizabeth, or so it would seem.  Beautiful and popular, she gets the prince (Marc) and is a princess herself.  She lives in a beautiful apartment, she has a younger sister Jaya, and devoted rich parents.

A character I really disliked was Jaya.  I know, she was supposed to be ten years old, but instead of being endearingly eccentric and unique, Jaya just came across as a bit insane. I loved however that Jaya could do old school magic, using charms and things, but she was genuinely too random a creature to like.

The final person we meet is Aaron, another Page at the Repository.  He really doesn't like Marc and thinks he's up to some bad things.  Aaron is of course infatuated with Anjali too, and sees Marc as competition for her affection.  Aaron and Elizabeth get to work together several times and we get the impression that if Aaron and Elizabeth had enough time together, their characters would really grow.  As it is they spend little enough time with each other, but there is a wonderful repartee and I found myself really liking Aaron's dry wit and sarcastic ways.

There is a lot of foreshadowing in The Grimm Legacy but it never really becomes as serious as it implies.  The hints of darkness are never fully realised so when it becomes clear that Anjali's been taken by a Bad Person and Marc, Elizabeth and Aaron decide to help, I read on to see how it got played out, but I didn't read along out of this breathless omgiwanttoknowwhathappens!

The resolution involves a Golden Key and a secret garden.  The Bad Person is not really very effective at being bad and honestly, all the characters manage to do things just that bit too easily so when the resolution does happen and we near the end of the book, instead of elated, I just felt relief that it was over.

I have to say that I do admire the author who has clearly done so much hard work in her research of the various fairy tales from the Grimm's collections and I love how the one item, Snow White's Magic Mirror is used in the story to both reveal and hide things from the characters.  I love how it only responded to rhyming talk and think that this was a really clever device by the author.

I think this is being marketed as YA but it definitely reads for the tween market. The romance is light enough for it not be an issue for younger readers and the writing flows very easily and as I mentioned before, the repartee between Elizabeth and Aaron is great fun to read.  But sadly, this turned out to be not a book for me after all.

Find the author's website here.  The Grimm Legacy was published in July of this year by Putnam & Sons over in the States, which means it's available in the UK from online stores, in hardback.
Who wrote this? Liz at 11:43 am

I would have rushed out to get this for exactly the same two reasons you mentioned :) Thanks for the review - I may order it from the library instead.

I HAVE TO OWN THIS BOOK.

Great review :) I'm not really sure if this is a book for me. I've had it on my wish list but I think I'll just forget about it for now.

Actually, this book is not available in the UK unless you order directly from Amazon. Foyles and Waterstones does not carry this book, not even their websites. I've checked everywhere. There is no UK cover design:( I really liked this book. Good review.

OMG I have to have this book :D
Awesome review. Off to add it to wishlist :D

Polly Shulman said to me that she is currently working for another book, not much of a sequel for this but another story entitled The Wells Bequest. She is also coordinating with a producer who is interested to make a animated movie for The Grimm Legacy. Just so you know.

I have read this book like 10 times and have memorized almost all of it!! Amazing book!!

this book i really like.I read the review and then the book, and I fell in love with the book!I really hope that a second sequel will come out.I would like to know if Elizabeth and Aaron get along together.And also, What happened to Elizabeth's sense of direction?Polly Shulman, I am waiting for the second book, or if not, another magically woven book that you have written!

I own this book and i have read it. it is truly one of the best books I have ever read and i don't say that often.

I just finished this book I loved it!

I've read the book five times, and I really don't like rereading books but this book and a few more are exceptions. I value anyones opinion though I do disagree on a few terms: Aaron wasn't the last of the characters we met it was actually the bad guy he (Aaron) was the third guy we met. I'll reread the book and come back later on this reply. In my opinion the romance between Elizabeth and Aaron was kind of a rush, though they did show signs of their love. True too Jaya was a bit on the more insane and hyperactive side though aren't ten year olds like that? I was. I hope Polly Shullman makes another book like an introduction book that introduces and has us acknowledge the book and it's characters.
The Cinderella theme on Elizabeth's life was pretty smart and I think Polly Shullman researched a lot on the book, we all agree on that don't we?
That's all for now! Though before I leave any recommendations anyone has for a book about robot building? And archery? Advance thanks!