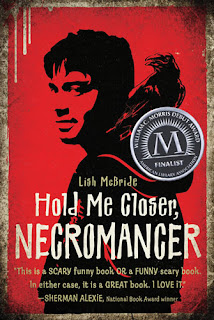 Synopsis
Sam leads a pretty normal life. He may not have the most exciting job in the world, but he’s doing all right—until a fast food prank brings him to the attention of Douglas, a creepy guy with an intense violent streak.

Turns out Douglas is a necromancer who raises the dead for cash and sees potential in Sam. Then Sam discovers he’s a necromancer too, but with strangely latent powers. And his worst nightmare wants to join forces . . . or else.

With only a week to figure things out, Sam needs all the help he can get. Luckily he lives in Seattle, which has nearly as many paranormal types as it does coffee places. But even with new found friends, will Sam be able to save his skin?
Many t.v. programmes come and go but one that I mourn the passing of is Reaper. There's something about a boy who's Joe Average in a normal job suddenly realising he's anything but. This is what drew me to this book. Sam's a college drop-out working in Plumpy's fast food restaurant flipping burgers when a chance encounter with a necromancer called Douglas promises to make his life very uncomfortable. Douglas isn't happy to find Sam as he should have got clearance from the Seattle council before moving into the area. Sam has two choices; leave the city he's lived in all his life or let Douglas train him and learn to use his (weak) powers.
I loved this book from the opening chapter. Sam's voice is brilliant; he comes across as kind, funny and quirky. If you judge a person by his friends then Sam must be awesome. There's Ramon who's known Sam since 6th grade and only works at Plumpy's to keep him company. Brooke is a firecracker hidden inside the body of a wholesome cheerleader. Then there's Frank, a newcomer at Plumpy's who earnest, kindly and hardworking. From the moment Douglas appears (wanting to know why a stray potato has broken his taillight) Sam's life goes from everyday drudgery to chaos and mayhem. He has to face up to the fact that he's a necromancer and has no idea how to harness his powers. This revelation leads him to look to his past for answers whilst trying to steer himself and his friends to safety.
As with all the best stories there's no easy answer for Sam and he has to adapt to his new life. One of the many fantastic things about this book is the dialogue. The friends are funny, really funny. I laughed openly at many of the situations in this book. It's not often that I get to say that some of the best lines in this book are uttered by a decapitated head but in this case it's true. However, it's not just wise cracks and smart one-liners. There's some seriously brilliant world building at play and great use of both first and third person narrative. Normally this change of point of view would jar but here it works perfectly. There's so much going on that I could have happily read another three hundred pages. We get a glimpse of some great and complex characters that I hope will all be making a reappearance in a future book. Hold Me Closer, Necromancer represents everything that's fantastic about urban fantasy; a richly-imagined world, brilliant characters, sinister moments and an old-fashioned compelling storyline.
This book was also a finalist in the William C. Morris YA Debut Award which only began in 2009 but anything which highlights great YA fiction gets a big yes from me. I was asked this weekend if I'd read any proper books. My response was to laugh (this isn't the first time I've been asked unfortunately) but I'd love YA books to start getting more respect. I'm not going to go off on a rant but there's so much good writing out there of which this book is one that I do get quite tired of it being so casually dismissed. I bought my copy of Hold Me Closer, Necromancer from Foyles which is my favourite place to peruse US titles but it's also freely available on Amazon and Book Depository. I'm not sure if a publisher in the UK has picked this title up yet but I hope so - the wider audience this fantastic book gets the better.
Who wrote this? Essjay at 7:30 am

Wow, what a great review. This isn't a book I'd normally pick up I don't think but your review has made me want to read it! I will have to add it to the wish list! thanks!

One to add to my list then! I remember watching a couple of episodes of Reaper and really enjoying it.

Sya from The Mountains of Instead raved about this one. Your review just adds to my coveting it lol. Thank you

Does anyone else sing the title in their head?