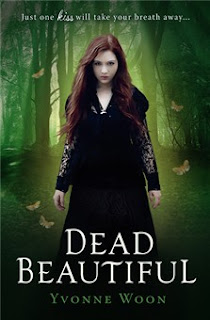 Synopsis
Desire. Danger. Destiny. Little did I know that this is what I would find at Gottfried Academy.
Coming from sunny California, the mist-shrouded Academy was a shock, with its strange customs, ancient curriculum and study of Latin - the language of the dead. Then I discovered that the school has more than one dark secret... I also discovered Dante. Intelligent, elusive and devastatingly gorgeous, most people can't decide whether they love, hate or fear him. All I know is that when we're together, I've never felt more alive - or more afraid.
I hadn't really been aware of Dead Beautiful until about a week ago. I started seeing it mentioned on Twitter and then walked into my local Waterstones and picked it up from the shelf. It's got a great synopsis and I always love a fish out of water story line so I took it home (with other books but this isn't the time or the place to discuss my obsessions). I read it in a week which is pretty slow for me - although I read the last third in a matter of hours, flipping the pages like a woman possessed.
Renee's parents die in mysterious circumstances and she's sent to Gottfried Academy on the East Coast. Gottfried's is exclusive and virtually unheard of. The dress code is archaic and Renee is faced with more rules than she's even known and a whole list of subjects that make no sense to her at all. Instead of lacrosse and history she's expected to learn Latin and horticulture. Against her wishes she makes the move but soon makes friends in the spooky, Gothic school. There's more than a few mysteries at Gottfried. The previous term a pupil called Benjamin was found dead in the grounds, his tie stuffed into his mouth. She's replacing a girl who left under suspicious circumstances and then there's Dante who barely speaks to anyone, except Renee. Nathaniel, Eleanor and the Grandfather are great characters, I could have quite happily read more about them. There's also some very thorough research and mythology in place that gives Dead Beautiful a solid foundation to build upon.
I enjoyed this book but I found I didn't love it. I'm not sure if it was a pace thing or the dialogue but it didn't grab me a hundred percent. It could be that I'm still in mourning after having finished an awesome book and am still searching for something to fill the void. Having said that as the mystery unravels the last third of the book flies. There are some original new twists to the paranormal genre and the relationship between Renee and Dante is very touching. The last chapter is simply gorgeous and although I've heard that there's a sequel on the way Dead Beautiful would be perfect as a stand alone such is the strength of the symmetry of the plot.
Who wrote this? Essjay at 7:30 am

Ha, I'm reading this at the moment! I found the writing a little strange at first (not sure why) but I'm used to it now. The plot strongly reminds me of Fallen but I think it reads better and the main character is more likeable.

I have already heard mixed things about this one. But with a cover like that you can bet I want it ;D