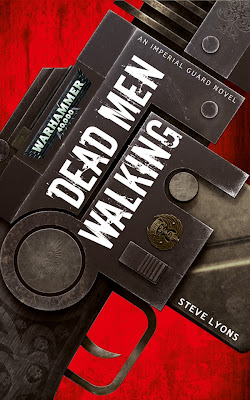 When the necrons rise, a mining planet descends into a cauldron of war and the remorseless foes decimate the human defenders. Salvation comes in an unlikely form – the Death Korps of Kreig, a force as unfeeling as the Necrons themselves. When the two powers go to war, casualties are high and the magnitude of the destruction is unimaginable.
Gunthar Sorenson is a mine overseer, a mine of limited ambition and imagination, whose most outlandish achievement has been to date the planetary governor’s daughter, albeit in secret. So when one of his teams report finding something strange deep in a vein of ore, his curiosity is piqued; the governor’s daughter has spoken of rumours of such things, of strange constructs that powerful men have been whispering about. Thinking to curry some more favour with her, and perhaps her father, he descends into the mines to see this old, rune-marked thing for himself, never imagining the devastation that its discovery presages.
As the Necrons rise and the city falls, an Imperial Guard troopship is rerouted to the planet, bringing the famed Death Korps of Krieg into the fray. Notoriously stoic and fanatically devoted to life -and death- in service to the Emperor, it’s abundantly clear that winning hearts & minds isn’t on their agenda. As the war spreads and the world is torn apart, the story opens up, following the fate of Gunthar, his erstwhile flame as well the ageing commissar Costellin, assigned to the Death Korps.
I liked the way Lyons opened up the story behind the Death Korps- not by trying to get under the skin of one their men so much, but via the metamorphosis of the PDF volunteers, notably Gunthar, who have the dubious honour of being trained by Death Korps personnel. Very interesting stuff indeed, especially as by this time X is a well established & sympathetic character. The Death Korps are the stars here, and are far more interesting than the Necrons, who don’t really seem to do much except react after their initial assault.
There’s little glory and as much hope in DMW, just a desperate, bloody war of attrition and a tragic twist that really brings life in the 41st millennium home.
You can read an extract here...
Who wrote this? Mark at 8:00 am