The Ritual by Adam Nevill 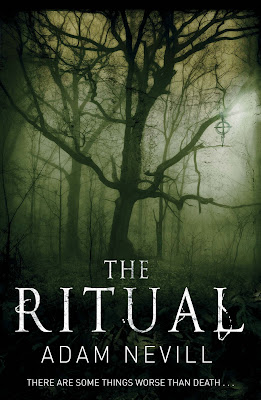 And on the third day things did not get better. The rain fell hard and cold, the white sun never broke through the low grey cloud, and they were lost. But it was the dead thing they found hanging from a tree that changed the trip beyond recognition.

When four old University friends set off into the Scandinavian wilderness of the Arctic Circle, they aim to briefly escape the problems of their lives and reconnect with one another. But when Luke, the only man still single and living a precarious existence, finds he has little left in common with his well-heeled friends, tensions rise.

With limited fitness and experience between them, a shortcut meant to ease their hike turns into a nightmare scenario that could cost them their lives. Lost, hungry, and surrounded by forest untouched for millennia, Luke figures things couldn’t possibly get any worse.

But then they stumble across an old habitation. Ancient artefacts decorate the walls and there are bones scattered upon the dry floors. The residue of old rites and pagan sacrifice for something that still exists in the forest. Something responsible for the bestial presence that follows their every step. And as the four friends stagger in the direction of salvation, they learn there are some things worse than death…

I started reading this while we were en route to Paris, courtesy of Eurostar, and by the time we hit the Channel I was profoundly glad we’d chosen to go on a city break rather than go camping.

By the time we got to Paris I was promising myself I’d never set foot in a forest again.

The Ritual starts off with a familiar enough premise, that of a small group of old friends going hiking together (happily, there are no virgins or teenagers in sight) but the tension is there from the get-go. Things go downhill faster than a suicidal lemming as the characters head off the beaten track in the vain hope of finding a shortcut to ease the strain being felt by those too unfit and unprepared for the planned hike, let alone the creeping terror that awaits them.

Adam evokes the oppressive, claustrophobic feel of the ancient, primal forest in vivid detail, bringing it to life and making it an utterly believable backdrop for the horrors to come- the first night at the abandoned house is a masterclass in creeping horror. The characters’ plight, particularly that of the main character, Luke, is made all that more desperate because they’re fleshed out enough as things progress for you to care about them. Their problems are problems we can all relate to- there aren’t any outlandish I-was-a-SAS-commando figures here, just four guys with contemporary problems and who’ve grown apart under the pressures of life.

Adam took the second half of the book in a direction I certainly wasn’t expecting, and while this is no bad thing, is did feel like it took a few chapters to find its pace again. But given how fast it reads, and the truly chilling content packed into it, it’s not anything to complain about. Bleak and uncompromisingly creepy, this was made to be read on a dark and stormy night. If you dare.
Who wrote this? Mark at 9:00 am

I have this on my to read pile, I'm looking forward to it even more now I've read your review. Think I'll be reading it during the day when it's sunny though!

Especiallyliving by a rather scary forest that already has a chilling reputation.

Thank you for the review, Mark. Finally, somebody understands me! Appreciate it. Adam