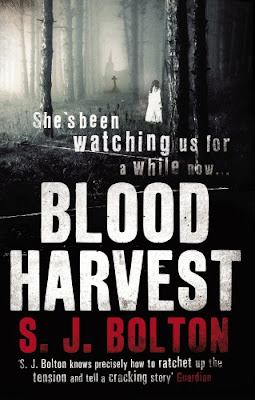 NOW YOU SEE HER... Gillian is haunted by the disappearance of her little girl two years ago. A devastating fire burned down their home, but she remains convinced her daughter survived.


NOW YOU DON’T... Ten-year-old Tom lives by the town’s neglected churchyard. Is he the only one who sees the strange, solitary child playing there? And what is she trying to tell him?


NOW YOU RUN... There’s a new vicar in town – Harry – and he’s meeting the locals. But menacing events suggest he isn’t welcome. What terrible secret is this town hiding?

In Blood Harvest we meet the lovely Fletcher family, mum Alice, dad Gareth and sons, Joe and Tom and daughter Millie.  They have just moved into the village of Heptonclough and built their new house by the church(es) and graveyard.

The book opens with Tom and Joe having a great look around the graveyard and a bit of a game.  It is when Joe hears Tom calling to him, and realises Tom is too far away to be doing so, and that the voice is far too near, that the icy cold drops of terror roll down your spine.

Harry, the new vicar, senses that someone is watching him whilst he's preparing the church for service.  It's been closed down for several years as an awful accident happened there some time ago and because of that no one wanted congregate there any more.  Harry is determined to gather his new flock together, no matter what it takes.

Evi is a psychiatrist and has started seeing Gillian, a young bereaved woman who had lost her home and her small daughter in an awful fire not too long ago.  Gillian is grieving and heartbroken but she appears to be flourishing under Evi's guidance.

When Gillian becomes obsessed with Harry and thinks she's fallen in love with him and that he was "the one", Evi resolves to stay away from Harry, even if it means putting her own blossoming feelings second.

Tom and Joe come to realise that someone is out there, watching them.  Joe has sort of made friends with her and will speak to her when no one else is around.  The times that Tom does see her, he is scared out of his wits.  She's odd-looking, with hands and feet and a head too big for her small child-sized body.  And when Millie is stolen from a harvest festival and then found up in the gallery rafters of the old church, they are convinced that it is this strange girl who is to blame.

His parents doesn't believe Tom when he speaks about her.  He becomes obsessed with keeping the house locked up, checking the doors and windows.  His previously close relationship with his brother Joe disappears and he becomes withdrawn and obsessive.  His parents hand him over to Evi to try and figure out what's going on.  The fact that he hears voices, this little girl's voice, has his mother Alice worried about schizophrenia.

As the story unfolds, strand by strand, SJ Bolton gives us exactly what we want.  A twisty tale full of tension and no little terror.  There were some instances, whilst I was reading this (alone) whilst away from home, that I literally felt myself pinned to the bed by terror.  I couldn't even reach out to turn off my light.  I was scared out of my wits.

SJ Bolton is a superbly subtle writer.  She knows her audience exceedingly well and she plays us like a finely tuned instrument.  She manages to to give us very real characters who act and react in a very human and honest way to various pressures placed on them.  The thriller aspect of the novel, or rather the psychological impact of the novel is tremendous.  We are never quite sure if Tom and Joe are crazy - are they seeing and hearing this girl?  And if so, who is she? And does she have anything to do with the disappearances of other girls in the area, as well as Millie's kidnapping?  And if it's not her doing all these things, then who is it really?

By far the most noticeable character arc/development within Blood Harvest is that of Harry, the new vicar assigned to Heptonclough.  Harry is a such a nice guy.  I warmed to him as a character and all I wanted was for him to come out on the other side of this in good order, with maybe a chance to win Evi's hand.  I obviously will not tell you what happens but I was hugely sad when I closed the covers of the book and had to say goodbye to Harry, Evi and the Fletchers.  They had really got under my skin as characters and I did dash away a bit of a tear at the end.

SJ Bolton's writing is going from strength to strength.  She really has become, without a doubt, one of the UK's top thriller writers.  Her planning and pacing is immaculate and kudos to her editor Sarah for allowing Ms. Bolton to tackle such varied stories within each standalone novel thus far.  I am really looking forward to reading Now You See Me and this time, for sure, I won't be waiting until the paperback comes out!

If you're tentative about reading thrillers and think they are all about the crazy action and breathless pace, put your doubts in your pocket and give SJ Bolton a try.  Her writing will surprise you and shock you.  It is spine tingling stuff and it is just so well written and thought out. I am about to blaspheme (look away!): I think that in SJ Bolton we have someone who can take on Tess Gerritsen at her own game and win.  For sure.
Who wrote this? Liz at 10:41 am

I am definitely adding this one to my list. I am intrigued by this author, so thank you for bringing her to my attention.

Great review! I read this book a while ago and I really loved it too, it was so scary, she has a wonderful way of holding your attention ... I couldn't put it down.
Sharon Bolton comes from the same town as me and she says that the desolate beauty of the moorland countryside around here is the perfect setting for the sort of books she writes.
I'm looking forward to reading more of her stories.

Great review, thanks! I'm going to add this to my birthday wish list.

I read Now You See Me a week or two ago and loved it. It's well worth the read :)

This sounds great. I read my first S J Bolton book earlier this year, I shall definitely be checking this one out.