Priceless: How I Went Undercover to Rescue the World's Stolen Treasures by Robert K Wittman and John Shiffman 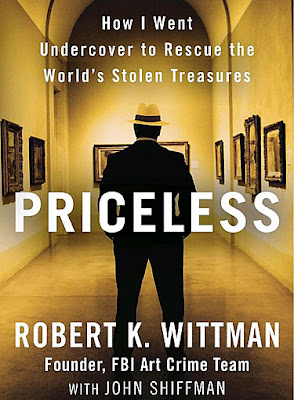 The Wall Street Journal called him “a living legend.” The London Times dubbed him “the most famous art detective in the world.”

In Priceless, Robert K. Wittman, the founder of the FBI’s Art Crime Team, pulls back the curtain on his remarkable career for the first time, offering a real-life international thriller to rival The Thomas Crown Affair.

Rising from humble roots as the son of an antique dealer, Wittman built a twenty-year career that was nothing short of extraordinary. He went undercover, usually unarmed, to catch art thieves, scammers, and black market traders in Paris and Philadelphia, Rio and Santa Fe, Miami and Madrid.

In this page-turning memoir, Wittman fascinates with the stories behind his recoveries of priceless art and antiquities: The golden armor of an ancient Peruvian warrior king. The Rodin sculpture that inspired the Impressionist movement. The headdress Geronimo wore at his final Pow-Wow. The rare Civil War battle flag carried into battle by one of the nation’s first African-American regiments.

The breadth of Wittman’s exploits is unmatched: He traveled the world to rescue paintings by Rockwell and Rembrandt, Pissarro, Monet and Picasso, often working undercover overseas at the whim of foreign governments. Closer to home, he recovered an original copy of the Bill of Rights and cracked the scam that rocked the PBS series Antiques Roadshow.

By the FBI’s accounting, Wittman saved hundreds of millions of dollars worth of art and antiquities. He says the statistic isn’t important. After all, who’s to say what is worth more --a Rembrandt self-portrait or an American flag carried into battle? They're both priceless.

The art thieves and scammers Wittman caught run the gamut from rich to poor, smart to foolish, organized criminals to desperate loners. The smuggler who brought him a looted 6th-century treasure turned out to be a high-ranking diplomat. The appraiser who stole countless heirlooms from war heroes’ descendants was a slick, aristocratic con man. The museum janitor who made off with locks of George Washington's hair just wanted to make a few extra bucks, figuring no one would miss what he’d filched.

In his final case, Wittman called on every bit of knowledge and experience in his arsenal to take on his greatest challenge: working undercover to track the vicious criminals behind what might be the most audacious art theft of all.

After reading The Infiltrators which I loved, I thought I'd give another of my languishing non-fiction book titles a read.  I chose Priceless as I genuinely enjoy heist movies and heist books.  I wanted to see what a real life/live detective did to capture these "gentleman" thieves as they are often portrayed in the movies like The Thomas Crown Affair / After the Sunset etc.

I was not disappointed.  Working together as a team, Wittman and Shiffman's narrative flows easily - it never gets bogged down with too much extraneous information and we very quickly come to realise that there is no flash, no show, about Wittman.  We meet Wittman as he's on his way to meet some villains.  He's in the back of the car, an FBI agent, deep under cover and there is this sense of malice and you wonder: is this guy gonna make it out of this alive?

Witmann tells us where he grew up, some information about his parents, other things he did before joining up with the FBI and how he came to be part of the "Art Crime Squad".   Not everything goes smoothly and Witmann has some awful things happen to him and his family in this time.  But reading Priceless you get a real sense of Witmann's character and that of his wife.  They form a strong team and I think a lot of that really helped me connect to Witmann and so I wanted him to succeed.

We are taken along for several cases, both standard FBI jobs and the more "glamorous" art theft cases.  Whitmann makes this really interesting statement at one stage - and I know I was guilty of this thought too - that because of Hollywood we always assume that thieves steal items on demand for fabulously rich collectors or for themselves.  This is of course not the case.  Most thieves are dirty nasty scoundrels and their customers are no better.  I felt my "world view" slightly dented but I read on because the sheer determination, nose to the grindstone hard work that went in to each case as it unfolds is just remarkable.  But then, so was blind luck.

Some way into the book there are photos of various items Wittman managed to save.  There are also photos of him and his family and some villains whom he has met.  They vary widely from nasty pieces of work to slightly clueless people who suspected they were passing on something stolen but weren't quite sure. The photos look impressive, until you read the book and discover the amount of hard work and various shenanigans it took to get these items back to their rightful owners and you realise what an amazing job had been done.

I found it fascinating how he described some procedures and how low priority art theft cases are in the bigger scheme of things when there are terrorists threatening violence.  Also, what struck me is how the majority of the book deals with art theft in the USA and how it had a very low profile, it was practically non-existent, until Wittman proved to his superiors that it should be looked at on an equal footing as other more severe criminal cases.  It is an interesting book, full of great information but also, stories well told from the "other side" of the heist spectrum.

Like The Infiltrators, I would highly recommend this non-fiction book as something to dip into to reassert reality because things really aren't like they are in the movies or in fictional books.  It is a great informative read and one that is definitely a keeper and a recommender-onner to others for the sheer differentness of the subject.
Who wrote this? Liz at 1:45 pm