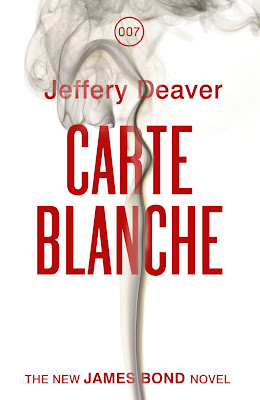 Fresh from Afghanistan, James Bond has been recruited to a new agency. Conceived in the post 9/11 world, it operates independent of Five, Six and the MoD, its very existence deniable. Its aim: to protect the Realm, by any means necessary.
As Liz mentioned before, the hardback is a striking book, and weighs in at a pleasing 428 pages. The cover proclaims that it is “the new James Bond novel”, and it’s true on two fronts: this is a new James Bond novel, and it’s a new James Bond. This contemporary take on Bond has nothing to do with the Connery/Moore era, or Craig’s, or even the Faulk’s Devil May Care incarnation, although it does hold to some core traditions of the James Bond enterprise.

Carte Blanche sees Bond on the trail of a creepy villain with quasi-necrophiliac tendencies and his delightfully ruthless assistant, working against the clock to uncover the nature of the chaos they are planning to unleash. It’s a pursuit that ranges from London to the outskirts of Belgrade, from the heat of Dubai to the streets of Cape Town, the trail littered with red herrings and near misses.

Deaver is accomplished writer and Bond is an institution, a byword for high stakes thrills. The child of this happy union, however, doesn’t really live up to the pedigree of its parents. All of the elements are there- M, Q, Moneypenny, fast cars, silenced Walthers, beautiful women and exotic settings, with the added twist of being set in a world dogged by the legacy of Al ‘Qaeda and its cohorts.

And yet, if you replaced ‘Bond’ with ‘Smith’, you wouldn’t really take much away from the story.

It’s a decent enough espionage thriller, with a couple of nice twists, but apart from one notable exception it never really convinced me that (the somewhat metrosexual) Bond was in true danger. And Bad Guy no. 1, Hydt, doesn’t really gel with the emphasis that has been given to the book being set in the modern world, given the ever present spectre of counter-terrorism that it has become synonymous with. Hydt’s quite a character, but he feels like a throwback to the villains of the age of Connery et al.

While I can appreciate what has been attempted here, I don’t think it’s worked. Not for me at least. In a word: meh.
Who wrote this? Mark at 8:00 am

I have a copy of this but haven't read it yet. I listened to Jeffery Deaver talk about his version of Bond at the Hay Festival and I did wonder how Bond was going to fare being brought into the modern world. From the sound of your review, it seems that he might have been better off staying in the 60's. I'm still going to give it a go but it's interesting to hear what you thought of it. Thanks Mark!