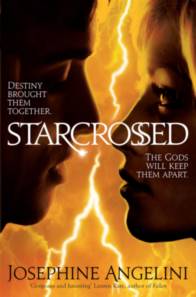 Synopsis
Destiny brought them together. The Gods will keep them apart.

When shy, awkward Helen Hamilton sees Lucas Delos for the first time she thinks two things: the first, that he is the most ridiculously beautiful boy she has seen in her life; the second, that she wants to kill him with her bare hands.

With an ancient curse making them loathe one another, Lucas and Helen have to keep their distance. But sometimes love is stronger than hate, and not even the gods themselves can prevent what will happen . . .
When I first heard about this book I wasn't sure how a Greek myth based paranormal romance would work. Potentially this combination isn't a bad thing but it sat on my shelf for a while before I dived in. Helen lives with her dad and has one close friend, Claire . Other than that she enjoys running track, working in her dad's shop and being inconspicuous. As the book develops we realise that she isn't just terminally shy - she's aware that there's something different about her. A man who tried to touch her on a ferry disappears with a sizzle of electricity. She has to try to run more slowly in track to avoid bringing attention to herself. Helen is a girl who's spent her life knowing she's different but trying to ignore it.
When Lucas and his brothers arrive at school all her effort goes out of the window in a day. She can't stop herself from throwing herself at him - not to get his attention but to kill him if she can. She soon finds herself a victim of school hierarchy - the one thing that she'd tried so hard to stay away from. Although Helen discovers the answers about her super-human powers she also finds that she could potentially be in danger as could her whole family.
I enjoyed reading Starcrossed, Helen is incredibly likeable and her friendship with Claire is genuine and funny. I also thought that the development of her relationship with Lucas is really well done. I really felt for Helen and the injustices she goes through at first at the hands of his family. The only part that I didn't enjoy was a character who arrives later on in the book. Possibly this is because this character is getting in the way of my preferred ending and all books need conflict but I found myself really disliking this character and the hold they have over Helen. Other than this the mythology aspect of Starcrossed is very enjoyable and gives the book a real structure. Seeing how the Greek gods and their offspring manage in 2011 is very entertaining! One of my favourite characters is Cassandra who, just like the Greek myth, is a prophetess who has a tragic future ahead of her. I'm really looking forward to seeing more of her (and the rest of the characters) as the series progresses. The next book, which I think is called Dreamless, is out in May 2012.
Who wrote this? Essjay at 7:30 am

The secondary characters like Cassandra really did stand out in this book. Fabulous review. I can't wait for the next book.

Adds May 2012 to filofax in order to stalk booksellers for the book.

I loved the way Josephine Angelini put the story together. It was very entertaining, fast paced, and had twists that I never saw coming. I found myself becoming very involved in this story and becoming very much like a character in the story, as if I were part of it but looking over Helen's shoulder the entire time. I am a huge romance novel fan, and this book definitely scored high for me in terms of romance. Written for teens, it was modest and romantic, while not going over board with details. Perfect read for people who enjoy reading about Greek mythology and romance combined.