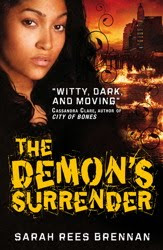 WARNING: SPOILERS FOR THE PREVIOUS TWO BOOKS IN SERIES!
Synopsis
The Goblin Market has always been the centre of Sin's world. She's a dancer and a performer, secure in her place. But now the Market is at war with the magicians, and Sin's place is in danger. Keeping secrets from the market she loves, struggling with a friend who has become a rival, Sin is thrown together with the Ryves brothers, Nick and Alan - whom she's always despised. But Alan has been marked by a magician, to be tortured as the magician pleases, and as Sin watches Alan struggle to protect the demon brother he loves, she begins to see both brothers in a new light. But how far will brother go to save brother - and what will it cost them all?
I love this series and The Demon's Surrender has been up there with my most anticipated releases of the year. I managed to get a copy (from the fabulous Foyles) before heading off on holiday. As soon as I heard that this last book would focus on Sin I was overjoyed as the Goblin Market is a genius creation and the two are entwined. However, at the end of The Demon's Covenant Mae has thrown her hat in the ring and been marked out as a possible new leader for the market. Merris, now sharing her body part time with a demon, has put the two through a series of tests to see which could be the new leader. Her last trial seems almost insurmountable but both are determined to succeed.
Meanwhile Alan and Nick's relationship continues to be a thing which all outsiders fail to understand. In fact, I'm never sure if the two of them understand it either. Add to this Jamie and Sebastian and there's a whole lot of characters with whom to catch up and wrap up their stories. Another aspects of the Demon books which I love is the way that each one follows a different characters point of view. First we had Nick, then Mae the "tourist" and now Sin who, although human, has spent her whole life knowing about magic and demons. As a dancer she understands that her life is under threat at every market, she is used to living her life on the edge. She's also seen loved ones taken over by demons and understands their every twist and turn. Never a fan of Alan and, more recently, Nick she finds herself thrown into their world.
I think I loved this book the most of all three. Sin is both independent and courageous but also vulnerable and fiercely protective of her siblings. As she discovers more about Alan she finds she has to reassess her feelings towards him. Despite the fact that she's in direct competition with Mae she constantly supports and defends her. As the story progresses Sin finds that it's the very people that she's shut out that could be her best supporters. The characters in all three books have matured and changed and Sin is no exception. Through the very fact that demon's cannot lie she is told some pretty life changing facts. As ever, the dialogue is snappy, snarky and at times I laughed aloud. I think it's the conversations including Nick that get me the most - he's my favourite swoonable anti-hero. The way that he explains to Sin that he has a friend and that another one would be too much trouble just got me, I giggled for ages.
All of this is wrapped up in the most delectable world ever and I'm sad the series is over. I was almost sure I knew the bookshop near the British Museum which makes an appearance - next time I'm there I'll ask about demons. Not that I actually want to hear a truth from one. If this series has taught me anything it's never ask a demon a question - ever. Oh, and don't open your window to one in the middle of the night, you really will live to regret it.
Who wrote this? Essjay at 7:30 am