Shadows on the Moon by Zoë Marriott 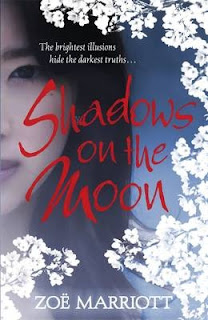 Trained in the magical art of shadow-weaving, sixteen-year-old Suzume is able to recreate herself in any form – a fabulous gift for a girl desperate to escape her past. But who is she really? Is she a girl of noble birth living under the tyranny of her mother’s new husband, Lord Terayama, or a lowly drudge scraping a living in the ashes of Terayama’s kitchens, or Yue, the most beautiful courtesan in the Moonlit Lands? Whatever her true identity, Suzume is destined to capture the heart of a prince – and determined to use his power to destroy Terayama. And nothing will stop her, not even love.

I've been looking forward to getting stuck into Shadows on the Moon for ages so when I saw on Zoë's blog that it had been seen in the wild already I set aside the weekend to read it. Suzume is initially happy with her family and cousin Aimi at their home and her privileged lifestyle. Her mother has been long absent visiting a family member when soldiers come and kill her father and Aimi. Suzume manages to escape by accidentally using a skill she didn't even know she had - that of shadow-weaving. Alongside this and the help of an old man (and fellow shadow-weaver) called Youta she manages to escape them. When her mother finally reappears she is whisked off to live with her and an admirer of her mother, Terayama-San. From this point on the book takes a darker turn and Suzume starts a long journey that will test her to the very edge of her capabilities.
I loved Suzume, she's both brave and resilient. Within her core is an absolute desire to survive and this drives her along as her life takes various twists and turns. Although her mother is keen to forget their previous life and embrace her new marriage, Suzume is loyal to the memory of her father and wants nothing more than the truth. This truth takes her from her comfortable life to that of a kitchen drudge and then away to start over again as a courtesan. Along the way she meets the quite frankly awesome Otieno - a boy she meets on a boat to the Moonlit Lands. He can see through Suzume's shadow-weavings and through the wall she has put up to protect her soft interior. In her every reincarnation he recognises and supports her despite the fact that she doesn't always treat him fairly as she is so focussed on her quest. Another character who I loved was Akira who rescues Suzume from a tight spot. Akira is wonderful, strong yet caring and I absolutely adored her back story which I won't go into so as not to spoil the plot. Needless to say I was praying for a good outcome for her.
One of the themes of Shadows on the Moon is that of self-harm. At no point is this subject trivialised or glorified, in fact it's one of the most sensitive approaches to it that I've read. The origins of Suzume's self-harm is clear; her mother never lets Suzume speak about the death of her father which she witnessed. Instead, from the age of fourteen, she is urged to keep her memories inside. As the book unfolds Suzume remembers other things that her mother did: forcing her to keep her love of music to herself, constant criticism and a lack of warmth and support. Keeping all this within with only a desire for revenge for company affects Suzume deeply and her rage turns inwards. As the years roll by Suzume becomes stronger but at times still resorts to self-harm.
Everything about this book is beautiful from the passing seasons, the food (which had me starving as I read) to the clothes. Although the plot is fast-paced and exciting it was underlined with a gentle sort of rhythm as Suzume goes through her various reincarnations. I would highly recommend this book and it has convinced me to check out Zoë's other books too.
Who wrote this? Essjay at 7:30 am

I know it's not cool for authors to turn up and comment on their own reviews, but..I can't help it. Thank you, Essjay! *Beams*

its bloody awesome ain't it?! I couldn't put it down at all and I keep telling everyone they have to read it! :D

Sigh. I LOVE Zoe!! You should DEFINITELY make it a point to read the rest of what she's got! I'm SO anxious for this book, but I'm US not UK. *pines*