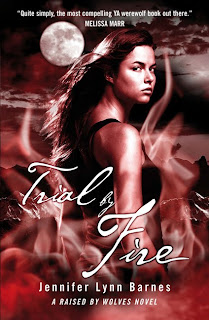 At seventeen, Bryn is has the usual schoolgirl worries: a new boyfriend, a new school and a new home. But she has one major concern that her friends don't have: she is an alpha - a human girl in charge of her own werewolf pack. When Bryn and her closest friends, Dev and Lake, broke from the werewolf Callum's pack, it had all felt right. Together with Chase, Bryn's new love, they had rescued some newly made female werewolves from a despicable master and established their own pack, with Bryn as leader. Yet Bryn has always resented the rules of Pack life - the constant bowing to authority, the submission to the alpha. And she is determined to live differently, to run this pack openly and justly. Then one night, a badly beaten werewolf shows up on her territory. He needs help, sanctuary, care. But taking him in could violate inter-pack rules, and no one knows better than Bryn the costs of challenging those rules. Obedience is law in Pack life, but Bryn is going to break the rules, again.
The second book in a series can be tricky. After all, some of the exciting stuff has been and gone; world building, character introductions, love interest etc. However, the flip side to this is that the characters are now old friends. We know that Bryn is a survivor, stubborn and determined to succeed despite the difficulties she faces. The book opens with Bryn getting used to being the alpha of her new pack. Whilst she wants to be relaxed and non-confrontational about it the events of Trial by Fire force her to look at her position in a different way. Just as she's trying to adjust Lucas arrives on her doorstep; beaten and bloody.
Now she's an alpha there are few people she can turn to for advice. Callum is being unhelpful and the other alphas are just not the kind of wolves Bryn would turn to. Instead she finds she has to dig deep and find the answers within whilst trying to keep her pack calm. Devon is as brilliant as even in Trial by Fire and has become Bryn's second in command - but even this can be difficult as Bryn treads the fine line between friendship and leadership. Just as things couldn't get more difficult a strange group of humans turn up and stake a claim on Lucas.
Ironically it's the human characters that are more menacing in this book. I enjoyed the complex and threatening character of Caroline who really pushed Bryn into difficult decisions. Also, Chase and Bryn's relationship isn't just cut and dried which I appreciated. They haven't known each other long and Bryn realises that they have a great deal to learn about each other before their relationship deepens. I loved that wolf and human or not they still have to deal with mundane complications like differences of opinions. Trial by Fire is a great sequel to Raised by Wolves. The stakes have been raised and as a result Bryn is forced to make serious decisions which have far reaching results. Also, an absolutely awesome twist at the end which I didn't see coming. I look forward to more!
Who wrote this? Essjay at 7:30 am

I really need to get to these. I really like it when human characters in paranormal stories are vital to the plot :D It makes me feel as if anything is possible.