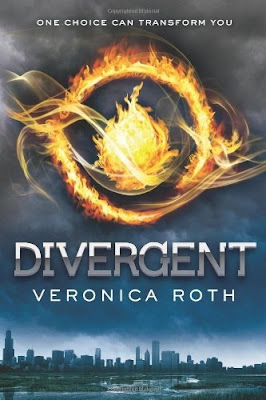 She turns to the future in a world that’s falling apart.

For sixteen-year-old Tris, the world changes in a heartbeat when she is forced to make a terrible choice. Turning her back on her family, Tris ventures out, alone, determined to find out where she truly belongs. Shocked by the brutality of her new life, Tris can trust no one. And yet she is drawn to a boy who seems to both threaten and protect her. The hardest choices may yet lie ahead…. A debut novel that will leave you breathless.

I am loathe to be another person banging their drum about Divergent and how good it is.  I read Divergent some months ago, because Zoe Marriott could not shut up about it.  She won a copy directly from Veronica Roth and the copy was annotated with these tiny yellow stickys in which Veronica had given glimpses about things like music she listened to whilst she wrote certain scenes etc. I discreetly asked Zoe for her copy and she in turn told Lynsey Newton to pass it on to me to read and it was eventually sent to me with a sticker that said this: 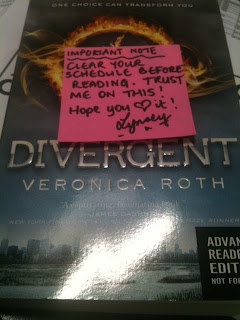 I mean, how on earth could I resist?

And I subsequently read the book in one sitting, cover to cover and adored it. I loved it so much that I started handselling it to everyone I spoke with.  But do you think I could sit down and write a review about it?  It was hard.  It hurt my brain.  So instead I continued to handsell it on Twitter and to my SCBWI friends and to their kids.

This book is superb.  It deals, in quite an adult fashion, with an incredibly difficult choice at a very young age.  How do you choose somewhere to spend the rest of your life? I mean, you are still growing up and don't have all the tools to make this overwhelming decision.  Here, I remembered what it felt like being 15 and having to decide which subjects I wanted to take for the rest of my school career that will ultimately guide me to what I will study when going to university.  It blew my mind.  And it certainly blew Tris's mind as she stood there, having to wait and decide which of the factions she will be going for.  Even though the choice was limited to Candor (the honest), Abnegation (the selfless), Dauntless (the brave), Amity (the peaceful), and Erudite (the intelligent) they seemed far too many choices and yet, equally, far too few.

I am sure most of you know which choice Tris makes but it makes for interesting reading to see her fulfil that choice, the repercussions and the consequences, the lies and the subterfuge that takes place surrounding her choice.

And of course, from this, the whole story hinges on Tris becoming part of her group, figuring out the hierachy of this world and learning about the untruths about the various factions they are told for a variety of reasons.

If, for any reason, you've been looking at Divergent and thought: too much hype, not my thing, girl protagonist, nothing is as good as Hunger Games, I urge you with all my heart to re-look at Divergent and to give it a go.  The writing is superb, as is the world Ms. Roth has created.  Tris is an amazing character and grows so much in Divergent.  Yes, there is a bit of a love interest, and Four is a great match for Tris.  He is a real boy, a strong and independent young man and you can see why Tris falls for him.  And before you put up your hand and say: "eeew, kissing" - I'm happy to say, there is more action, more tooling up with weapons and doing crazy stunts, than there is kissing or staring at each other in a loving fashion.

I feel that I've not done Divergent the justice it deserves with this write-up.  My heart still swells too much thinking about it and I know I want to re-read it soon.  I'm linking to a few others here as I want to give you a taste of what others thought about it.  Here is Zoe Marriott's review which I loved because, as a published writer, she has the opportunity to see the mechanics behind the story and yet, it did not put her off and she loves it.  And this review is from The Booksmugglers whose opinions I value highly and then finally, a review from My words Ate Me (who may just have the coolest blog name EVER!) and who I don't know from a bar of soap, but would like to.

Divergent is one of those books that makes you think.  You read it, put it down and pick it up again.  The good news is that the second book in the series is called INSURGENT and that it is out soonish, but that is all we know right now.  *bites knuckles* Am looking forward to reading the second book very soon indeed.
Who wrote this? Liz at 8:19 am

I think you did a grand job Liz. Well done.

This is a great review. I've only read brilliant things about this book, it's been on my list for a while but I think it's just jumped up another load of places.

I tried to review it too and did much worse! I've been trying to make everyone read it too - can't wait for part 2...

great review. I still havent read this one and I really want to!! I must get it soon and put it to the top of my TBR! :D

Great review - and thanks for the shout-out, Liz :) I love this book so much. I'm in awe of a debut author that can produce a story, characters and a world this strong, and I can't wait to read the next thing she writes.