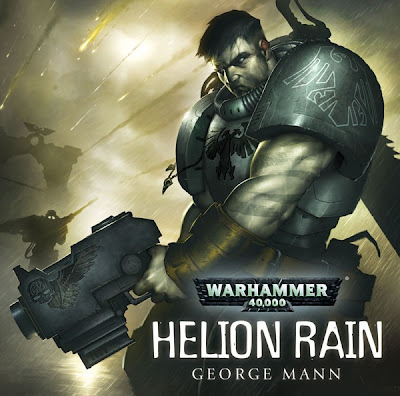 The world of Idos is on the verge of destruction, wracked by catastrophic storms and plagued by ravening tyranids. Into this maelstrom come the Raven Guard 4th Company, the warzone perfectly suited to their lightning-strike methods of combat. Led by Veteran Sergeant Grayvus, their mission is simple – to rescue the planet’s last survivors. But in the midst of this nightmare, they receive new orders to locate and destroy a power station..

By way of introduction to Sergeant Grayvus of the Raven Guard, Helion Rain drops you into the middle of the war for the survival of the imperial world of Idos. Plagued by the unrelenting Tyranids and hammered by the meteor swarms sweeping the world, Idos stands on the brink of destruction.

In HR, George Mann eschews the preliminary stages of the war to focus on the desperate gambit which could change the outcome of this war, the kind of behind-enemy-lines raid the Raven Guard are so good at, and which is entrusted to Grayvus and his squad of scouts. Mann does make the assumption that the listener is at least familiar with the basics of the 40K universe here, but to be fair it is a relatively safe bet.

HR is combat heavy, with the background chatter of bolters and howling aliens a near constant throughout as Grayvus and his squad fight their way towards their objective, although Mann makes full use of the lulls between engagements to flesh out some of the traditions of the Raven Guard, and perhaps it’s the relative fleeting nature of these moments that gives them more impact.

Performed by Black Library stalwart Toby Longworth, the characters voices are clear, and the background sound effects are used well, never overpowering or undermining the narrative. All in, it’s a nice piece that underlines the war in Warhammer, gloriously oversupplied with exploding xenos and the desperate heroism of the Astartes.
Who wrote this? Mark at 8:00 am