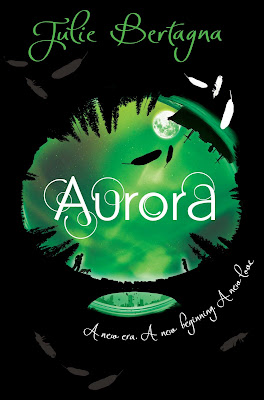 MFB jumped at the chance to host this thoughtful review/guest blog by Julie Bertagna, author of the dystopic trilogy: Exodus, Zenith, Aurora.

By 2012, the tide of apocalyptic and dystopian fiction that is taking the YA publishing world by storm will be a veritable tsunami. Pick your apocalypse, disaster or dystopia. Asteroid hit? Moon crash? A world short of water? Flooded by rising seas? Running out of oil? Scarce on oxygen? Or scarce on basic freedoms, ruled by sinister powers who decide your fate?

Divergent by Veronica Roth is the latest, much-hyped debut on the dystopian scene, marketed as a natural successor to Suzanne Collins’ massively successful Hunger Games trilogy. I was interested to discover that Divergent was optioned for a film adaptation by the makers of the Twilight movies even before the book was published, because I often felt I was reading the script of an action mov-ie, rather than a novel - and that, for me, was both the book’s weakness and its strength.

In this dystopia world, devastating war has been followed by a ‘great peace’. I had to guess that this war had been global as Beatrice Prior’s world and references are limited to a future Chicago, where society has been divided into five factions, each cultivating the various virtues which, it is believed, will save humans from further war.

The strangeness of this idea gripped me right away. It’s a scenario worthy of Margaret Atwood. YA readers, stressed out by exams and life choices, will identify with the tests sixteen-year-old Bea-trice is put through and her pressurised decision over which faction she will belong to for the rest of her life: Candor, Dauntless, Amity, Erudite or staying with her family in Abnegation? Beatrice becomes Tris and makes a choice which wrenches her from a safe but dull existence and all she has ever known. And for the next few hundred pages, Tris is immersed in a brutal initiation trial: a gang world of extreme violence, where every day is a fight to survive the murderous tests deemed essential in order to become a true member of her chosen faction. In The Hunger Games it’s clear from the outset that Katniss is fighting for her life and for her loved ones, but it’s only in the final hundred pages of Divergent that the real plot kicks in and Tris’ torture begins to make sense.

Yet amid the over-long violence some characters of real depth emerge and Tris has to grapple with difficult moral choices - and an overwhelming attraction to a boy who becomes central to the real battle ahead.

It’s a thrillingly fast-paced and action-packed story, but ultimately the relentless violence wea-kened the book for me because it had a cartoon quality that strained my credibility too far, too often. One one occasion Tris is beaten unconscious, in another she is shot and has a bullet lodged in her shoulder - episodes which would floor ordinary mortals - but Tris’ discomfort is fleeting and soon she is back on her feet, battling on regardless. The unending brutality became repetitive and numbing, and Tris’ one-dimensional reaction to most events is to want to kick, punch or strangle someone. So when the really tragic episodes occur, what should be heart-wrenching is diminished, losing its power to shock amid so much page-by-page violence.

Divergent is an intriguing addition to the welter of futuristic visions of the current dystopian craze and Tris is a gutsy, unpredictable girl character. Often perplexing, hard to like or understand, it was these very flaws that kept me interested in her when the violence became tedious. Tris may take bravado and girlpower to unrealistic extremes, but this plain, long-nosed, selfish, gung-ho girl is a welcome divergence from some of the more bland, beautiful and needy heroines of YA fiction.

***
This is another very interesting artice Julie had done for The Scotsman on Dystopic Fiction, which is definitely worth a look at.

Thank you so much to Julie and to MacMillan for thinking of MFB to host Julie's rounds around the internet. Aurora, the third book in the trilogy is out now.
Who wrote this? Mark at 9:16 am

This would work well in a movie. In movies people want a heroine who fights on even when shot at - in movies the unbelievable works.