The Heroes by Joe Abercrombie 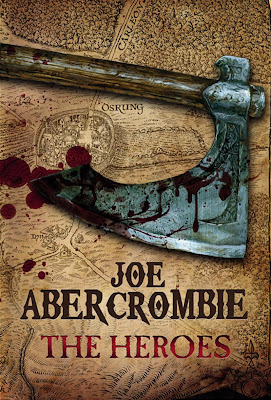 They say Black Dow's killed more men than winter, and clawed his way to the throne of the North up a hill of skulls. The King of the Union, ever a jealous neighbour, is not about to stand smiling by while he claws his way any higher. The orders have been given and the armies are toiling through the northern mud. Thousands of men are converging on a forgotten ring of stones, on a worthless hill, in an unimportant valley, and they've brought a lot of sharpened metal with them..

The first thing that struck me about the hardback copy was how good it felt in the hand with its lovely matt dust cover. It's chunky book, which has become a bit of a hallmark for young Mr Abercrombie, and weighs in at a respectable 498 pages.

The Heroes tracks the build up, execution and aftermath over the 3 days that a vicious battle rages in the North as the punitive force of the Union seeks to bring the army of the amoral and ruthless Black Dow to battle in an attempt to curtail his rising influence. The story is told from the viewpoints of 3 of the principal characters, the narratives weaving around each other to create a very convincing and visceral overview of the battle.

The first is the careworn Curden Craw, veteran of almost as many battles as Black Dow himself, but burdened with a streak of honesty and a notion of honour that few of his peers share. He's finding that his regrets at the hard life he chose all those years ago are growing by the day, eroding the beliefs that have kept him alive and sane so long.

The second is Calder, a self obsessed prince of the North whose desire to grab power is almost as strong as his disdain for the idea of having to work for it. He'll lie, cheat, steal and kill to get what he wants, and not necessarily in that order.

The third, and my favourite, is Bremer dan Gorst, the disgraced former champion.A master swordsman and lethally efficient killer, Bremer is tortured by the ignominy of his dismissal and is seeking redemption or death in the maelstrom of battle - and not even he is sure which he would prefer. Socially awkward and scorned by his peers, he seethes with bitterness and his narrative is littered with his caustic, unspoken thoughts.

There's precious little for the characters to sing about in the world Abercrombie has made for them- it's a brutal, unforgiving place, bleak and scarred by the wars of men and the legacy of the ancient feud of an order of wizards that's barely hinted at in this book- the resident archmage and one of his principal opponents do feature, but magic gets about as much screentime here as it did in Peter Jackson's siege of Helm's Deep.

What we get instead is political scheming, betrayal, axes smashing into faces with lethal effect, infected wounds, and the wounded screaming and pissing themselves. Death doesn't come easily, but when it does it's brutal and messy. And that's precisely half of what makes The Heroes so cool. The other half is the way Abercrombie brings his characters to life, rounding them out layer by later against the backdrop of a well crafted and immersive setting, making The Heroes stand out as much more than just a gorefest. Admittedly, the fact that he does lavish attention on secondary characters does threaten to clutter things up now and then, particularly when it comes to talking about the warriors of the north and their pedigrees, but it's a sporadic thing rather than a constant, and as such doesn't hinder the otherwise fast pace of the story.

If you like your fantasy hardboiled and gritty, then The Heroes is a wargasm waiting to happen. If you're looking for unicorns and Tom Bombadil, move along.