We are really proud to host Day 2 of Justin Somper's blog tour on MFB. Justin is the creator of the Vampirates sequence of books and they are roaringly good fun.  We will be reviewing the final book "Immortal War" in July as part of our Under 14's Only month.  In the meantime, I got to interview Justin about all and sundry.  Check it out: 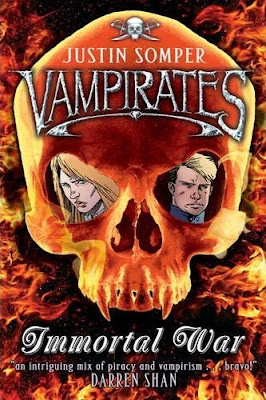 When you started writing the Vampirates books, did you ever think the series would extend to six books?
When I first had the idea and began playing around with it, I knew that it was going to be too much material to fit into just one book. I had the idea to do the first book and then "suck it and see" after that (have to utilise all vampire puns while I still can!). It was my UK publisher, Simon & Schuster, who initiated the six book sequence. Initially, they bought four books and then decided, even before the first one was published, that they would like another two. I think there is mileage in the idea and characters to go even further without it getting tired, hence I have left a few loose threads at the end of IMMORTAL WAR. At the same time, I feel pretty satisfied at having written these six big books with all these characters in. It's been quite a journey for us all and hopefully the books have got better and more intriguing as the story has gone on.

A lot happens in them – we have a lot of characters and great set-pieces – did you end up creating something like a series bible to keep it all straight in your head?

I've often been tempted to create this kind of bible but I've just never got around to it. Sometimes I do have to do a fair bit of referring back to the previous books but mostly all the characters are in my head. And of course I have a great team of editors, both in the UK and US, to keep me on the right path. But, going forward, with another project with lots of characters, I think I probably would create a bible from the get-go.

I know my favourite character has to be Grace. Do you have a favourite Vampirates character? (we won’t tell anyone, we promise).

I have many favourites! I could say Sidorio, because he consistently pushes the envelope, or Lola, because she takes it to the next level. But my favourite character might well be Stukeley. just think he's really complex and intriguing. He was only ever intended to appear briefly in TIDE OF TERROR and die, end of. I didn't expect Sidorio to sire him or Stukeley to still be there, in IMMORTAL WAR, but there he is. I like how conflicted he is between his new existence and the life, and comrades, he's left behind. I like the way he sometimes seems drawn back to goodness, but then the darkness takes hold of him. The chapter in BLOOD CAPTAIN where he returns to Ma Kettle's Tavern is one of my favourites across the whole sequence. One of my favourite characters in IMMORTAL WAR is Moonshine Wrathe.


How much research did you find you had to do? I am talking about weapons research, about pirates, about vampires and of course, about ships and sailing for the books?

I have pretty much had to do constant research for these books. Thank goodness for google! Obviously, the big initial research was into pirate history and vampire myth, to work out how best to fuse the two strands together and also to start developing characters. As the sequence continued, I did a load of research on mermaid myths for DEAD DEEP, as I worked on creating Kally and the fishtails. For BLOOD CAPTAIN, research work went into creating the geography and ritual of Sanctuary, as well as researching real-life cowboys as Johnny Desperado made his debut in the story. Originally Johnny was going to be a blue-eyed, blonde-haired all-American cowboy but as I researched, I found the vacqueros more intriguing and I figured Grace would too! We both like real outsider figures. Then for BLACK HEART, it was all about wine as I brought in Lola! Weapons research has been a constant too - for Sidorio and Connor's duel in EMPIRE OF NIGHT, say. My dad was an enthusiastic amateur sailor and he helped me with the sailing scenes in the first book. I also got the chance to go on the Cutty Sark a couple of times, which gave me the feel for the size and height of the ships. It all feeds in.


In a dream situation, should Jerry Bruckheimer knock on your door and say: “Justin, we want to turn Vampirates into a movie, who do you think should play your main characters?” What would your answer be and remember, money is no object.

LOL. I know that in reality I probably wouldn't get much say about this but it's a fun game to play! I would pay good money to see Angelina Jolie as Lady Lola. When I first wrote Sidorio, I thought of him as Vin Diesel but in the later books, he's become more Javier Bardem. I'd like to see George Clooney in there too, maybe as Molucco Wrathe. There's been waves of Hollywood interest in a VAMPIRATES movie and I know the Nocturnals are keen on this, so you never know!


I wanted to ask you about book 4 in the series: Black Heart. It is, for me, the book most tense book, with the Biggest Reveal. Did you anguish about writing this one at all?

That's very perceptive of you. All the books have presented me with different challenges but BLACK HEART and IMMORTAL WAR were probably the toughest of the six. With BLACK HEART, there was the real stress of revealing the twins' true parentage. And, by the way, this was not a plot I had planned from the outset of the sequence. As the books were read and got more and more popular, I was getting a lot of questions from readers, and noise online, debating Grace and Connor's real background so I decided to really crank up that sense of mystery towards the end of BLOOD CAPTAIN and then tackle it head on in BLACK HEART. The way that Grace and Connor were conceived was potentially problematic given the broad age range of my readers, so I had to be really careful at how this was depicted. Then there was Sally's return which was hard to write. The first draft of the book had lots of chapters where Sally told her story to Grace. My wise UK editor slashed her red pencil straight through about eleven of these and we then put our heads together to work out a more engaging - emotional but unsentimental - way to tell that back story. The answer became to have Grace, with her growing psychic powers, effectively step into Sally's memories and become her. This changed the whole feel of the book for the better. Then we had, as you say, the reveal of the true nature of Grace and Connor and that was stressful too as it wasn't something I'd intended from the outset. I worried that I was taking the sequence into too dark a place but, at the same time, it felt right. The sequence has become more epic and darker than I originally envisaged it. With all this going on, I couldn't find room to bring back the Vampirate captain in this book which is why his return is delayed until EMPIRE OF NIGHT. 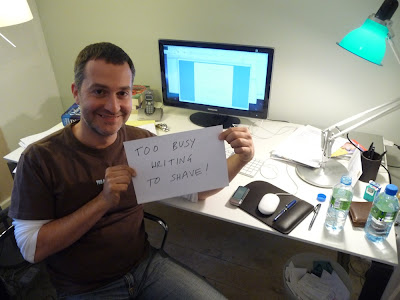 With The Immortal War, you bring the Vampirates sequence of books to a close. What was the most difficult / emotional thing for you to write (without spoilers) in this one?

I found writing the whole of this book surprisingly emotional and difficult. It has an elegiac feel from the outset and you'll see there are clocks everywhere you turn in the story, showing that time is ticking away. The challenge this time was bringing the story to a pause, if not a complete close, and giving all the key characters a chance to say goodbye to the readers who have journeyed through six books with them. Some characters get their happy ending but others don't. With EMPIRE OF NIGHT, I actually cried when I was writing the final death scene - most unusual! With IMMORTAL WAR, the whole writing process was quite challenging and raw in some ways. And again one departure resulted in minor waterworks. I'm still too close to this book to know how good a job I've done. I'll have to await (nervously) your, and other reader's, verdict.


I have always read the Vampirates books to background music – mostly soundtracks as it calls for stirring music. Did you ever do a soundtrack for yourself whilst writing?

I never write with music in the background - that just doesn't work for me. But there are pieces of music that I used to "warm up" for certain scenes and characters and other music which has inspired some of my writing. I've been asked to put together a VAMPIRATES playlist and you can find this both on GIRLS WITHOUT A BOOKSHELF and at www.vampirates.co.uk.


And I hate asking this, but I know a lot of your (and my) readers would love to know...what’s next for you?That's a nice question! I've got several ideas but one seems to have pushed itself to the fore so I'm doing some research and starting to play around with characters, setting etc. I don't want to say too much more in case it doesn't work, or is superceded by another idea, but it's another "enclosed world" story with a lot of strong, conflicted characters, with various shades of morality. I'd envisage it appealing to the same readers who enjoy VAMPIRATES, though there will be no vampires or pirates in this one!

Final question, one of my favourites as an aspiring writer. It’s a two-parter: a) what is your advice to aspiring writers out there and b) what was the best advice you were given when you started out? 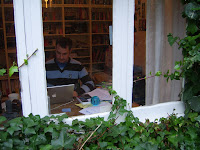 as you can and as widely as you can, so that you are open to the diverse ways different writers use language and tell stories, 2) write as often as you can and push yourself to try new things in your writing and don't get trapped into one genre all the time and 3) don't give up - the third one is essentially what separates those of us who are published and those who aren't. The best advice I was given was when author Jan Mark did a writing workshop at my school and advised the seventeen year-old me not to depend on writing to make a living! I've been lucky with the success of my books both in the UK and overseas, but it's nice not to have to write to earn money. That's a pressure I don't really want to introduce to my writing. Besides which, having other strings to my bow, helps keep me enjoying my writing and having fresh ideas to bring to it.