The Killing Place by Tess Gerritsen 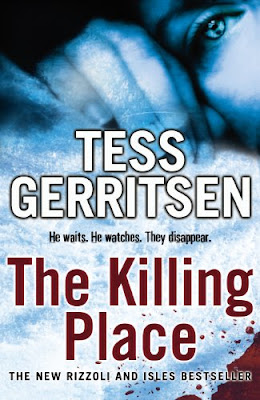 Something terrible has happened in the snowbound village of Kingdom Come, Wyoming. Twelve eerily identical houses stand dark and abandoned. Meals remain untouched on dining room tables. Cars are still parked in garages. The human occupants have vanished, seemingly into thin air. This is the unsettling place where Maura Isles finds herself trapped during a snowstorm. She has joined a group of friends on a drive to an isolated ski lodge, but when a wrong turn leaves her car stranded in deep snow, she stumbles down a private road into the valley of Kingdom Come, where she takes shelter - and disappears. Days later, Jane Rizzoli flies to Wyoming to search for her missing friend. A crashed vehicle has been found with four badly burned bodies still inside. The authorities assume that one of the women is Maura. But is it? Jane Rizzoli's search for the truth leads her to Kingdom Come, where a terrifying and gruesome discovery lies buried beneath the snow.I realised as I went through the blog over the weekend that I've not actually reviewed this absolutely excellent novel by one of my favourite crime writers, Tess Gerritsen.  I have no idea how it slipped through the cracks, but I'm happy to share my thoughts on this one with you.


Like many other people from the UK I first read Tess Gerritsen a few years ago - a woman's magazine were giving away the first book in the Isles/Rizzoli series and I remember being smitten with Ms. Gerritsen's incredible ease of writing.  I subsequently bought the next few books in the series and kept up to date with all the happenings and read the books more for pleasure, than for review.  That is bad, I know, but allow me my vices!

I've decided to review The Killing Place because it is by far the scariest and most intimately clausterphobic of her novels that I've read thus far.  Maura meets a friend and colleague at a conference and agrees - very unlike Maura - to spend time going away on a skiing trip with him and some friends after the conference.

Unfortunately the weather closes in, blanketing the world in snow, and they become badly lost.  But it is when the car they are in goes off the road that they realise they have to do something or they may all die, that matters kick off.

They find their way into the deserted private community of Kindom Come.  The houses are all empty, abandoned, and in each house the same picture of a dark eyed man staring pensively in to the sky hangs on the wall.  There are signs throughout the small village that something had happened - but what?  What mystery have they stumbled upon?

When Maura's return flight lands and she's not on it, the irrepressible Jane Rizzoli starts worrying.  She knows that this is not the way Maura does things - punctual, timely and tidy in all things, Maura's life is ruled by her own imposed rules and her non-appearance worries Jane more than she'd care to admit.  When she in turn flies off to Wyoming to figure out what's happened to her friend, and they subsequently discover a burned out car with four bodies in it, the logical conclusion is that one of the bodies might be Maura's.

Twisty and turny, The Killing Place held me spell-bound.  I literally could not stop reading the book as I desperately needed to know how things panned out.  Gerritsen's plotting is razor sharp and immaculate.  Her characterisation of Maura deepens our understanding of this wonderfully intense yet reticent character whilst Jane's concern for her friend allows the readers to glimpse how close they have become.

What I loved most about The Killing Place is Maura's determination to live.  She keeps moving ahead, against all expectations, even when you think that all hope is lost, she digs deep and continues.  It is a wildly creepy novel, because of the setting of Kingdom Come.  The mystery as to why it was abandoned sits at the back of your head whilst you're reading and each nightmarish glimpse of a clue, with each twist and turns, Gerritsen lures you along, taking you deeper into the layered story. Just superb.  I remember closing the book and heaving a sigh of relief and wiping a way a tear or two.

Gerritsen is a fantastic writer and all her books are imminently readible but there is a magic to The Killing Place that really stays with you for some time after you've finished reading it.  I know it makes no sense reading The Killing Place for a summer reads, what with it being set in Wyoming during winter, but trust me - it is a wholly satisfying read for the beach or a lazy day in the backgarden.  Because come winter, you wouldn't want to go anywhere it snows.

The Killing Place has been out now for some time, in both paperback and hardback.  Find Tess Gerritsen's website here.
Who wrote this? Liz at 8:50 am