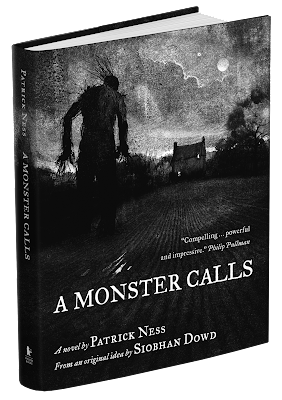 MFB is the seventh stop on the blog tour for A Monster Calls by Patrick Ness, and you can read the seventh extract below. If you’ve missed the first one, visit The Mountains of Instead to start the tour.

A MONSTER CALLS BY PATRICK NESS

Stories, Conor thought with dread as he walked home.

It was after school, and he’d made his escape. He’d got through the rest of the day avoiding Harry and the others, though they probably knew better than to risk causing him another “accident” so soon after nearly getting caught by Miss Kwan. He’d also avoided Lily, who had returned to lessons with red, puffy eyes and a scowl you could hang meat from. When the final bell went, Conor had rushed out fast, feeling the burden of school and of Harry and of Lily drop from his shoulders as he put one street and then another between himself and all of that.

“Your stories,” Mrs Marl had said in their English lesson. “Don’t think you haven’t lived long enough to have a story to tell.”

Life writing, she’d called it, an assignment for them to write about themselves. Their family tree, where they’d lived, holiday trips and happy memories.

Important things that had happened.

Conor shifted his rucksack on his shoulder. He could think of a couple of important things that had happened. Nothing he wanted to write about, though. His father leaving. The cat -wandering off one day and never coming back.

The afternoon when his mother said they needed to have a little talk.

He frowned and kept walking.

But then again, he also remembered the day before that day. His mum had taken him to his favourite Indian restaurant and let him order as much vindaloo as he wanted. Then she’d laughed and said, “Why the hell not?” and ordered plates of it for herself, too. They’d started farting before they’d even got back in the car. On the drive home, they could hardly talk from laughing and farting so hard.

Conor smiled just thinking about it. Because it hadn’t been a drive home. It had been a surprise trip to the cinema on a school night, to a film Conor had already seen four times but knew his mum was sick to death of. There they were, though, sitting through it again, still giggling to themselves, eating buckets of popcorn and drinking buckets of Coke.

Conor wasn’t stupid. When they’d had the “little talk” the next day, he knew what his mum had done and why she had done it. But that didn’t take away from how much fun that night had been. How hard they’d laughed. How anything had seemed possible. How anything good could have happened to them right then and there and they wouldn’t have been surprised.

But he wasn’t going to be writing about that either.

“Hey!” A voice calling behind him made him groan. “Hey, Conor, wait!”

The eighth and final extract of A Monster Calls will be posted on Patrick’s author page on Waterstone's, Thursday 12th May…