Die For Me by Amy Plum 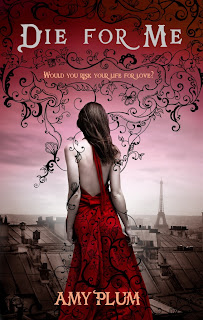 My life had always been blissfully, wonderfully normal. But it only took one moment to change everything.

Suddenly, my sister, Georgia, and I were orphans. We put our lives into storage and moved to Paris to live with my grandparents. And I knew my shattered heart, my shattered life, would never feel normal again. Then I met Vincent.

Mysterious, sexy, and unnervingly charming, Vincent Delacroix appeared out of nowhere and swept me off my feet. Just like that, I was in danger of losing my heart all over again. But I was ready to let it happen.

Of course, nothing is ever that easy. Because Vincent is no normal human. He has a terrifying destiny, one that puts his life at risk every day. He also has enemies . . . immortal, murderous enemies who are determined to destroy him and all of his kind.

While I'm fighting to piece together the remnants of my life, can I risk putting my heart—as well as my life and my family's—in jeopardy for a chance at love?
I'd heard loads about Die For Me before I'd finally got hold of a copy and was hoping it would get me out of my grump slump I've been in whilst I search for a new book to adore. So was this the one to do it? Well, sort of - but let me explain. Katie's parents have died in a car accident so she and her sister Georgia move to Paris to live with their grandparents. They begin school there and at the start of the book are desperately trying to move on from the past. Katie has become reclusive, seeking refuge in books and coffee bars. It's at one of her afternoons out with a book that she first sees Vincent and they are drawn to each other. Coincidence continues to throw them together until she starts to see past his arrogant exterior to the loving yet secretive boy that he is.
Vincent's true nature means that Katie has some major readjustment to go through if their relationship is to continue. Aside from this she's also forced to start concealing things from her family yet also face up to the losses of her past. Initially (hence my continued grump) I found Katie to be too self-absorbed for me. Obviously she's going to be having suffered a major loss but I also found her inner-monologue relating to whether she should be with Vincent a little much. However, once their relationship reaches an understanding the book really took off for me. Katie went from being grieving, confused teenager to driven, focussed and kick-ass and at this point I began to start appreciating Die For Me.
Vincent lives with friends in a fabulous, ancient and huge Parisian house. As Katie becomes more entangled in Vincent's life she discovers exactly what he and his friends really are. Also, they have enemies which makes Katie's life suddenly filled with danger and intrigue. I really love the setting of Die For Me and it's obvious that the author is in love with Paris and France in general. You can tell by the descriptions of the city, the coffee bars, the food and (especially) the hot chocolate. As well as being enthralled by the story I also wished I was there experiencing the city for myself. The ending is suitably exciting and I was pleasantly surprised by how gory it was - not at all what I was expecting. I found Die For Me a bit of a slow-grower but by the end I really had taken bookish Katie to my heart.
Who wrote this? Essjay at 7:30 am

Email ThisBlogThis!Share to TwitterShare to FacebookShare to Pinterest
Labels: Amy Plum, atom, Die For Me

So glad you enjoyed it in the end. I loved it and am impatient for the next book :D

It does make you feel like you could just step into it, doesn't it.

It really does - I almost felt like I was there!

Great review! I am going to Paris next week, I think I might take this with me.