It is our great pleasure to host Steve Feasey on MFB as part of his galloping blog tour to celebrate the release of his newest (and final) novel in the Changeling books: Changeling - Zombie Dawn.

I've had the opportunity to chat to Steve on several occasions and he's such a cool guy. He's basically a geek, you see. He knows stuff about stuff. Like creatures and monsters and how important it is to have a 'tooling up' scene for your heroes in a book full of action.

I've asked Steve to chat to MFB today about monsters, and those that inspired him whilst growing up. And he's given us a great piece which I am very proud to share with y'all. 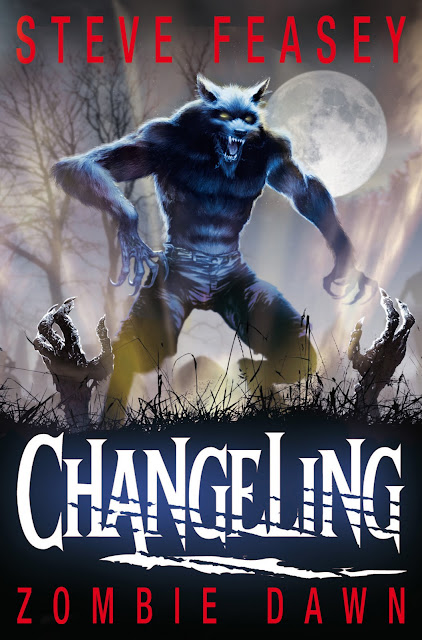 Go on, admit it, you love monsters. How could you not? Great supernatural creatures have always been at the heart of horror fiction because when we read horror and dark fantasy, we want to be entertained; to be drawn out of our normal lives and plunged into a world of the paranormal. And we want monsters. At least, I do.

As part of this blog tour, in my guest blog over at Mr Ripley’s Enchanted Books, I explain why Alien is my favourite movie, and surprise surprise my reasons for loving that film are mostly taken up with the monster. I love the originality of that creature, and I salute Carlo Rambaldi for creating that head with the primary and secondary mouths – genius! Because monsters and the larger-than-life problems that they pose make great reading, as the protagonist has to overcome insurmountable odds if he or she is to survive (and hopefully save the day). Great monsters create great conflict, and great conflict is the very essence of great story.

When I was still in shorts and knee-high socks, I discovered Greek mythology. I loved those tales, and they led me onto mythology from other cultures. And the stories I liked the most were the ones with the great monsters in. I liked anything where the hero had to cross over into the Underworld, and if the same story happened to involve kickass monsters – and they usually did – I was in my element. My particular favourite was Heracles (Hercules if you must, but I always resented the way the Romans stole the Greeks’ gods and goddesses). I loved the whole half-man, half-god thing and although I know he’s not exactly a great role model – he’s set those twelve tasks after committing infanticide for heaven’s sake – he does hit the Yee-ha button when it comes to monster slaying. Of the vile creatures he has to face and vanquish, the one that always stayed in my mind was the Lernaean Hydra - a monster so fiendish that as you lop off one of its heads, it grows two back in its place! Of course, old Herc figures out an ingenious way to defeat it, but the image of that self-regenerating creature stayed with me for a long time.


Old legends and myths are rich hunting grounds for writers. I still love reading them, and use a lot of the creatures I discover as inspiration for the monsters (both heroic and malevolent) in my books. I remember reading a couple of lines about the hierarchy of angels in ancient Jewish texts. One line described the Arel as defenders of the human realm from demonkind – a kind of winged vigilante gang – and I was struck with the idea for Moriel the battle angel (who’s still one of my favourite characters in the Changeling books – You want kickass? She’s got it in spades!).

If I had to give one piece of advice to aspiring writers about creating their own monsters, it would be to really sit down and work out what makes them tick. In the same way that you need to crawl under the skin of your characters, you need to know your monster. It might be something you’ve borrowed from legend. It might be a classic trope such as a vampire, werewolf or zombie. But it needs to be your take on it. You need to know the creature inside-out and upside-down. Because if you do it’ll be real, and the readers will love discovering how your hero is going to finally put a stop to its dastardly shenanigans. 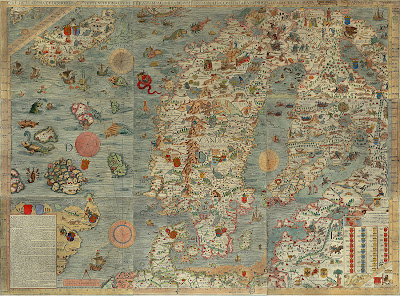 The map is in public domain at http://en.wikipedia.org/wiki/File:Carta_Marina.jpeg


I loved this blog post - thanks Steve!  Find Steve's very cool blog here.
Who wrote this? Liz at 9:56 pm

That's a good story. I like zombies and other related story. so scary :-)