The Captain Jack Sparrow Handbook: A Guide to Swashbuckling with the Pirates of the Caribbean by Jason Heller 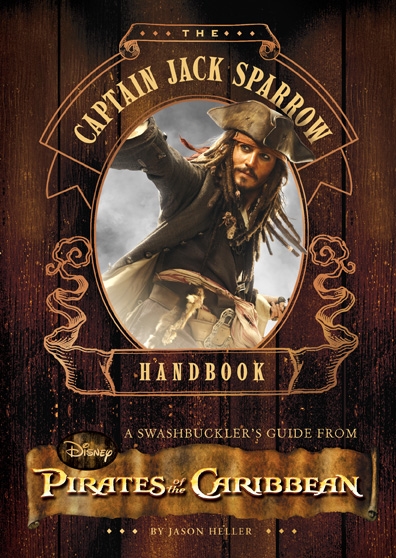 In the tradition of our popular "Batman Handbook" and "Indiana Jones Handbook" comes the world's only guide to emulating the most popular pirate in motion picture history: "Captain Jack Sparrow". Illustrated with film stills, line drawings, and helpful diagrams, "The Captain Jack Sparrow Handbook" will cover everything a swaggering swashbuckler needs to know, including: How to sail a ship; How to climb rigging; How to decipher a treasure map; How to break a curse; How to survive being marooned; How to battle a sea monster; and much, much more. With skills derived from all three films-and up-to-the-minute data regarding the forthcoming "On Stranger Tides" - this handbook will be a surefire hit with Pirates fans of all ages.

Receiving a copy of this in the post was such an unexpected treat.  With its tongue firmly in its cheek, this guide sets about to explain to us smelly landlubbers exactly how to behave as a pirate.  It covers recruitment in detail, deciphering treasure maps, how to survive when marooned, how to sail a ship and so on and so on.

It is a great resource for those who are interested in the Pirates of the Caribbean movies, including the most recent: On Stranger Tides which had just been released.  It is an insider's guide to all the trickster ways of Captain Jack Sparrow, complete with diagrams, illustrations and random bits of very rubbish (and occasionally) some good advice.

There are some great bits in this guide book, including things like Pirate Insults and a very important guide on getting a Treasure Map tattoo.  What I loved though is the following regarding the whole thing about no women on board a ship: 'Being obligated to hide one's gender to serve as a pirate is, of course, ludicrous. In fact it flies in the face of one's primary yet unspoken tenets: that social conventions and stereotypes are there to be shattered and that a pirate, of all people, should know better than to judge and look down on others.'  Rar! Were pirates the first feminists?

Jason Heller does a rum-job (see what I did there) in having put this little tome together.  He writes in an easy to read style and never strays from "character" putting across the various tenets of the Pirate Code across.  Mixing fact with fiction the handbook becomes an easy way to educate younger readers about pirates and what their lives were really like.

As a big fan of the movies and of Captain Jack Sparrow (I named my dog after him, fer heaven's sake!) the book is a great resource even for those who may not expect it to be.  It is a fab addition to my library which is sadly lacking in pirate literature. This will however be rectified, I think.  It is out at the moment so grab it up - it will make a great present for reluctant readers as it is such a varied read, with lists, illustrations and asides, that it doesn't actually feel like you're reading or learning.  I'd recommend this for readers aged 12+.

Do check out the Amazon page for this book as it is loaded with some fantatic reviews from other reviewers.

The book is published by Quirk Books.  Do check out the link as you can actually look at the first nineteen pages of the handbook to give an idea of the quality and layout.

It’s amazing! They always produce a great movie. Johnny Depp is always a great actor. It’s just sad that both Keira and Orlando are not cast anymore on this movie.

The simple fact is, audiences are smarter than to see any movie in 3D that's released in 3D. After the Avatar craze, studios were cashing in but now, people want to see a movie that was meant to be shown in 3D. The post-production conversion doesn't cut it anymore. Either the studios will invest more to make the 3D cameras more readily available or the 3D boom will again die down like it has in the past.

LOVE Jack Sparrow :D Does the book tell you te layout of the ships and what different areas are called?

Oh my goodness. I have a friend that would adore this book. I guess I know what she's getting for her birthday :)