Mark and I were invited by Lynsey from Transworld to attend something a bit unusual for a book launch.  I am a big fan of SJ Bolton - she writes very creepy thrillers - and so when the invite came through, I barely glanced at it and immediately emailed Lynsey back to say "ohmygodyes". 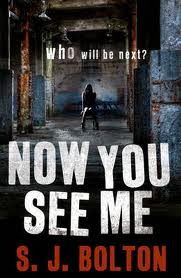 Turns out the new book - NOW YOU SEE ME - is reminiscent of Jack the Ripper's reign of terror in olden day London town.  And what would be a better way to launch a Jack book...than by having a guided Jack the Ripper walk?

I confess: I do not know much about Jack, at all.  Obviously I know who he is, about his lore, a few bits of info about his killings, but I am by no means an aficionado.  So this evening was not just going to be fun, it was going to be educational too.

Well, there we were, lurking outside Liverpool Street Station along with Keith from Books and Writers, the guys from Goldsboro Books, Miles from Milo Rambles blog and Tom from Crime & Publishing along with Mr. Tony Lee and his lovely bride, Tracey.  We were joined by author du jour, SJ Bolton (who looked immaculate as always) and a swathe of Transworld people.

Whilst we were standing, we became aware of this odd bloke staring at us.  He wore a bowler hat, was completely dressed in black in this suit that is maybe a bit...not quite right, and most curious of all, he carried this unlit lantern.  We traded stares with him, with each other.  Lynsey revealed that this is in fact our guide.  I thought "oh great, creepy deluxe!" Just who I want to show me around the remote alleys of London as frequented by Victorian London's most infamous killer. 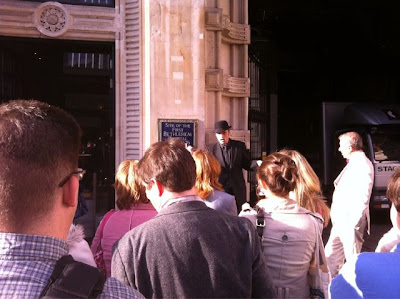 The tour got underway once everyone was gathered.  Our guide, "Frank" took to his role of creepy tour guide with gusto.  It is difficult to explain his schtick - it's sort of dead-pan psycho with a bit of a Tyler Durden, Tim Burton and Johnny Depp on a good day, thrown in the mix.   I admit it - I was dubious.  But once you get over the initial oddness, and you just accept that he's pretty damn good at what he does, you are happy to follow him around.

He took us all over the East End and spoke eloquently, with a trained orators voice, about the various Jack the Ripper murders, where they took place, some of the lore surrounding the killings.  But he also gave us interesting asides about the places we walked around. 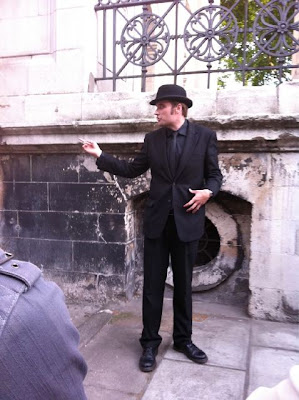 Following Frank it was really interesting to see how people reacted to his very pale face, his tallness, his odd attire and the lit lantern he carried.  They stared, they giggled and some just preferred not to notice.  They realised pretty quickly though that this was a Jack the Ripper tour and some people stopped to briefly speak to him.  We also had the occasional person linger amongst our group to listen to him or take a photo or six. 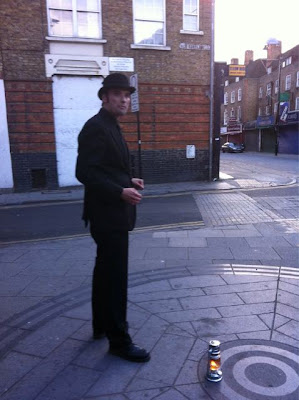 At the end of the evening we ended up at The Bell and Frank became Ben, much to our collective reliefs.  Ben was far more lovely than strange-staring-eyed-Frank and also easier to get a laugh out of.  SJ Bolton gave a great speech and did some singing of books.  It was an incredible evening and Transworld really outdid themselves with their hospitality and putting the tour together.  We are genuinely happy to have been part of it.

Oh, friend and fellow blogger Keith has already written his review of Now You See Me as well as a further write-up on the tour.  Check it out.

This is the very creepy book trailer they created for Now You See Me.

OMG! That trailer freaked me out! But I loved it. The tour sounds like it was brilliant. Thanks for sharing with us.