Circle of Fire by Keri Arthur (A Damask Circle Novel) 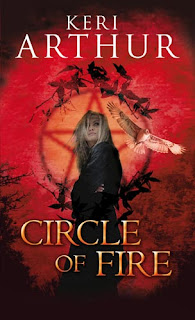 Sixteen teenagers taken from their homes. Eleven bodies recovered, each completely drained of blood. Some believe vampires are responsible. Jon Barnett knows its something far worse, and while in Taurin Bay to stop the killers, he quickly becomes enmeshed in a web of black magic. He needs help but fate gives him only one choice.
Madeline Smith has retreated to an isolated farmhouse, afraid of the abilities she cannot control - abilities that have killed. But when a ‘ghost’ brings a warning of danger and her nephew goes missing, Maddie has to leave her haven and learn to control the abilities she fears.
As Maddie and Jon’s search for the teenagers becomes a race against time, the greatest danger to them both could be the feelings they refuse to acknowledge.

Circle of Fire is my first Keri Arthur novel in a little while. I keep meaning to read some of her other novels but keep getting distracted. This however, was not the case. The book arrived in the post on Thursday evening and I spent Saturday on-and-off reading it from cover to cover.

I liked Maddie's character and found her an intriguing new heroine. She's not kick-ass, she's a recluse who has locked herself away from the world, spending most of her time tending the plants in her greenhouse and doing her best not to get into contact with her brother in law who dislikes her intensely.

When the novel opens Maddie is having a bit of an episode in her lonely ramshackle house in the middle of nowhere. Someone's appeared to her, in the guise of a ghost, asking for her help. As she puts the pieces together, and she just manages to think she's not going insane, he appears again, asking for her help, asking her to drive across the county to come and rescue him as he's trapped in a well, busy dying.

Heavy stuff. It's only when Jon (the guy in the well) reveals that her nephew may be in danger, as he visited the same area as all the other teenagers did before they went missing, that she genuinely gets what he's saying to her. Then, when it transpires that her nephew did indeed disappear from his room, without a trace, does Maddie get her butt in gear. She travels cross country, rescues Jon and discovers one of the creepiest inns since the Bates Motel.

The story strands are tied together really well and Ms. Arthur's writing is rapidly paced. I read the book in a few sittings in one day. There is a lot of action and adventure for the two main characters to get themselves knocked around in. Maddie and Jon's relationship is sweetly rendered. It moves from each of their perspectives throughout the novel and although it should have been jarring it works really well. You come to understand their characters quite well - even if you want to shake them a little - and it is with a satisfying sigh that you read the last few pages.

I am very keen to read the next two novels and to find out more about the Damask Circle as they sound a very interesting group. Find Keri Arthur's website here. Circle of Fire is published by Piatkus in the UK and is due out in August.
Who wrote this? Liz at 3:10 pm

The cover was almost enough for me to want to read this but your review has definitely tipped the balance - putting this book on my to be bought pile. OK, so more of a list than a pile, but you get my drift.

I should be reading ALL Keri's books, of course (re. Deadline Dames!), but there's the whole money issue... *sigh*

Yeah, one more book for my wife!