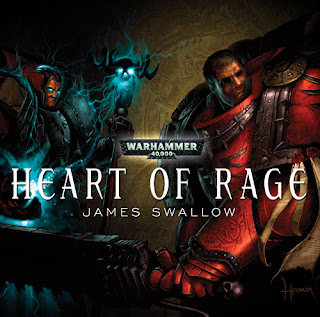 Aboard the Imperial Navy frigate Emathia, Brother–Librarian Nord and Brother–sergeant Kale of the Blood Angels make a startling discovery – an alien tyranid hive ship, half–destroyed and drifting through space! Under orders from the Magos Xeren, the Blood Angels board the ship to locate a lost scout team. But their fate is far from straightforward. Little do Nord and Kale realise the horrors awaiting them. For they not only risk their bodies, but their very sanity as well.

I stuck Heart of Rage in the CD player the same day I received it and listened while I did a bit of painting. I really wasn’t sure what to expect, since this was my first ever audio book.

It was quite interesting hearing someone else doing the voices and sound effects- the performer, Toby Longworth, has a rich, easily listened to voice and his timing is spot on (the voice & effects for Magos Xeren, the tech priest who leads the mission, were particularly satisfying).

Running at 75 mins, it does not requiring a serious investment of time, making it perfect for listening to while travelling, while managing to administer a solid, satisfying fix of heroism, horror and that special kind of violence that only Space Marines boarding a Tyranid hiveship can deliver!
It’s atmospheric, fun and worth the extra couple of quid for the experience alone. I’ve got it stashed to listen to again on my drive up to Games Day in September!
Who wrote this? Mark at 7:18 am

I couldn't say I'm fascinated about this kind of books, there is none of this kind in my bookshelves, but I admire people who read and follow their hobbies.

I loved listening to this book but an unfortunate side effect has been that every BL book I have read since... all the marine's voices are that of Sergeant Kale's... :o)