A Madness of Angels by Kate Griffin 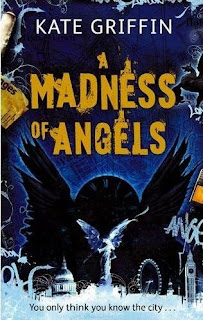 Synopsis:
When a man is tired of London he is tired of life; for there is in London all that life can afford - Samuel Johnson In fact, Dr Johnson was only half right. There is in London much more than life - there is power. It ebbs and flows with the rhythms of the city, makes runes from the alignments of ancient streets and hums with the rattle of trains and buses; it waxes and wanes with the patterns of the business day. It is a new kind of magic: urban magic. Enter a London where magicians ride the Last Train, implore favours of The Beggar King and interpret the insane wisdom of The Bag Lady. Enter a London where beings of power soar with the pigeons and scrabble with the rats, and seek insight in the half-whispered madness of the blue electric angels. Enter the London of Matthew Swift, where rival sorcerers, hidden in plain sight, do battle for the very soul of the city ...
I have waited a long while to finish reading this for one purpose only: knowing how much I would like it...I didn't want to have too long to wait for the second novel by Kate Griffin to appear. And The Midnight Mayor is due to grace our bookshelves around September, so it's not too long a wait.
Quite a few things are immediately apparent to anyone picking up a copy of A Madness of Angels - firstly, Kate Griffin loves London, she knows it inside out and she is a walking encyclopedia of small streets, graffiti and bridges. (I am sure she secretly works at the offices who produce the London A-Z.) Something else which is apparent is her storytelling prowess - the girl shines. Like Marie Brennan in Midnight Never Come, she has scratched the surface of the myths of the city and come up with a brand new set of archetypes which suit London and its residents perfectly. She twists and turns the storyline in interesting (and sometimes confusing) but always entertaining ways and makes you look past what you see every day as you commute into work and walk around in your all too brief lunch hour.
As for the story: it starts off a little chaotically and made me re-read it a few times. Until I got what was going on and then off I went; following Matthew Swift after two years of being dead, as he discovers why he's back, who brought him back, what's going on at the moment and how to survive in a world that he doesn't quite recognise all that much anymore. The reason for his confusion: he died an awful death. And thought himself dead...until he found himself alive again. Make sense? *sly wink*
I felt a bit ill during the course of the book as the creatures he comes across are not at all pleasant - for instance, he encounters the Litterbug and it is hugely reminiscent of the creature in Constantine (the movie) but quite a bit worse. It freaked me out, no end. A highlight of sickening creatures has to be the Hunger - whose sole purpose it is to feed. Hunger's "character" is written well and although I suspected how things were linked it was fantastic to see how Kate ties it all up. Especially when it came to the blue angels - the odd surreal moments in the novel where the narrative goes from I to we is a brilliant trick Kate uses to indicate the otherworldly nature of who Matthew Swift is and what he is becoming.
The magic used in the novel is very cleverly thought out. Sadly, saying more on the subject will make it sound trite but trust me when I say it is fresh and different and, once you think about it, you go "bloody hell, she got it right on the nose!" and hate/love Kate Griffin even more.
I would recommend A Madness of Angels to readers of the Jim Butcher Dresden Files, the Mike Carey Felix Castor books, along with fans of Neil Gaiman's books and Sandman graphic novels. Anyone who has ever played World Of Darkness RPG in any of its guises would love this too - it is taking world building and concepts to a different level. In fact, I would say that A Madness of Angels is on par with Neil Gaiman's American Gods...and probably more accessible as the archetypes dealt with in Madness is easier to access.
As this is one of our Summer Reads List, I am happy to score it a high 8 out of 10 stars!

I keep thinking about reading this every time it comes in at work. You may have just persuaded me :)

Well done Liz! A mouth-watering and convincing review. A copy of A Madness of Angels is on my shelf AND on my summer reading list. A soon as I have finished The Edge of Reason by Melinda Snodgrass I will read following books in written order:
- The Sword-Edged Blond by Alex Bledsoe
- A Madness of Angels by Kate Griffin
- Midnight Never Come by Marie Brennan

I love the synopsis. It sounds really good. :)