A Sealed Fate by Lisa Gordon 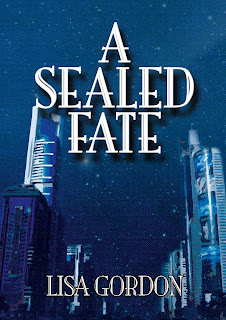 A Sealed Fate is a debut novel by Astrologer Lisa Gordon who poses at the centre of her story, the question of fate versus free will.

To escape the pain of failed relationships and careers, both Valda and Larissa take themselves to Dubai seeking not only success but a reason and purpose in life. Valda does indeed find success and to her astonishment, love, but all is threatened when she is introduced to a billionaire Sheikh. Her clandestine relationship with the Sheikh propels her into a murky web of deceit and she turns to Larissa for help.

As an astrologer, Larissa predicts that Valda and the Shikh’s destinies were sealed from the moment of their first meeting: however she keeps the dire fate that she reads in the charts a secret. Together, Valda and Larissa take a gamble in a game of cosmic Russian Roulette where the stakes are their lives and their adversary, fate itself.

Spiritual in its theme, this debut thriller also looks at the depth of personal relationships and the lengths two women would go to, to protect each other.
I received a copy of Sealed Fate a while ago and read it shortly after but then realised that I was doing it a disservice and that I should really re-read it again, which I did at the beginning of July. This is also why I chose it to be one of our Summer Reads books.

For a slender offering, it is a complex novel, written with great care. It is also one of the hardest books to categorise as it fits in both in the thriller genre as well as the much-overlooked esoteric fiction genre. It makes you ponder about things such scary things as destiny, fate and karma.

The two main characters are well written but there is a hesitancy about the author at first as they are introduced, slowing the novel down a bit. But you can tell when the author finds her feet and decides to run with the story.

It is an intriguing read as the two characters are almost mirror images – Larissa’s needs are spiritual whilst Valda is more materialistic and these opposites are used to contrast them very well.

The author has taken great care in describing Dubai and the city’s culture. She has an affinity for “place” in this and it turns A Sealed Fate into something a bit more complex than I initially thought. It’s pace again is a tad slow initially but it picks up and drags you along with Larissa and Valda’s story, spinning an ending that would satisfy the hardiest of thriller readers.

As I mentioned earlier, this is the debut novel by Lisa Gordon and it was a very competent one. I do however think that we will be knocked off our socks by her next offerings. A Sealed Fate shows tremendous promise and I score this at a very adequate 6 out of 10 stars and am looking forward to seeing more of her work in the near future. Find her publishers, Janus Publishing here . A Sealed Fate was published in January 2009 and should be available online and all good book stores.