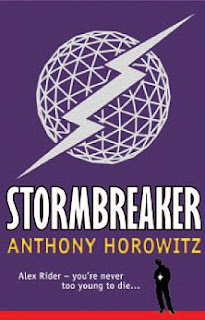 When his guardian dies in suspicious circumstances, fourteen-year-old Alex Rider finds his world turned upside down. Forcibly recruited into MI6, Alex has to take part in gruelling SAS training exercises. Then, armed with his own special set of secret gadgets, he's off on his first mission to Cornwall, where Middle-Eastern multi-billionaire Herod Sayle is producing his state-of-the-art Stormbreaker computers. Sayle has offered to give one free to every school in the country - but there's more to the gift than meets the eye.

I know, I know - this is not one of our summer reads novels...but I am allowed to be led astray. Bought this at Oxford Street Books in Whitstable on Saturday and read it in one sitting.

I saw the movie first, ages ago, and was intrigued by the storyline. I regret putting off reading Stormbreaker because I thoroughly enjoyed reading it. It may not have been high brow literature but it did what it said on the box: it introduced a cool new teen character in a modern day setting and it was chock full of adventure. It also serves to set up Alex and the the MI6 people quite well.

Bits are tremendously over the top and tongue in cheek, with nods to the 007 and Bourne books and movies. Instead of finding this jarring, I quite enjoyed it - it was like you were being let into a secret club of coolness.

I've - obvious from the above statements - not read any of the Alex Rider novels, and can only assume his character becomes fully developed throughout the series. Stormbreaker shows much promise and the world Mr. Horowitz creates for his protagonist is an interesting one. He goes a long way to show of Alex's independence and go-get-'em spirit whilst maintaining a repsonsible attitude - to a certain extent.

I tore through the book at a rapid pace - there is just enough introspection by Alex to keep the story balanced with the all out action happening. You root for him all the way through and the climax at the end of the novel is a no holds barred cinematic John Woo moment.

I look forward to reading some of the other books once I get my grubby paws on them. And although it's not a summer reads list I'll give it an honourary seven out of ten stars as it is crammed full of daring do and adventure. Find Anthony Horowitz's website here.
Who wrote this? Liz at 8:43 pm

I didn't know this book was made into a movie. I read it several years ago. While I agree with your review--it was very fast-paced and a cool read--it was a bit too shallow for me. Not really an emotional book by any means. Not that that's necessarily a bad thing, of course. :)

A 'secret club of coolness'? Great review and I am sold on this book now.

gotta say, i loved all of the books. granted, while the escapes that alex rider makes in the later novels (think space stations...) are absolutely surreal, they keep within the fast-paced context of the books. adults probably wouldn't appreciate the novels on the same level as a younger reader, but they're definitely worth a look...